Artwork at simulations training building honors Sgt. Henry Johnson a member of the Harlem Hellfighters who received the Medal of Honor posthumously in 2015 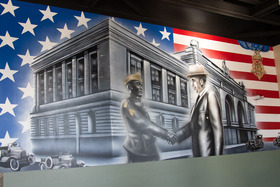 Johnson distinguished himself as a member of 369th Infantry Regiment, the famous "Harlem Hellfighters," part of the 93rd Division, American Expeditionary Forces, during combat operations against the enemy on the front lines of the Western Front in France during World War I.

The mural dipicts Johnson shaking hands with New York governor Al Smith upon his return to his hometown of Albany in 1919.

WHO: Members of the Camp Smith garrison.

WHAT: The opening of the newly, modernized simulations training building at Camp Smith with a prominent dedication mural to Medal of Honor recipient Sergeant Henry Johnson.

Still and video images of the ceremony. There will be an opportunity to talk with Camp Smith leaders.

Members of the press must call Staff Sgt. Jonathan Pietrantoni at 516-655-1336 for access to this secure military facility. Press must have identification and wearing of face masks will be required.

The painting is by Westchester artist Chris Rios who runs Rios Studios. Rios depicted Sgt. Henry Johnson meeting with New York Governor Al Smith in Albany, New York, where Johnson worked as a luggage handler at the train station depicted in the painting.

Johnson received the French Croix De Guerre in recognition of his heoric actions on May 14, 1918 when he and his colleague Pvt. Needham Roberts, fought hand-to-hand with a German raiding part of 25 Soldiers and defeated them.

The inspiration for the mural came from a PBS Documentary on Johnson that reported the welcome home event at the Albany Train Station at which Governor Smith shook hands with Johnson. Camp Smith was named for Governor Al Smith who served as governor in 1919-1920 and then again from 1923 to 1928.

Johnson went on a government supported speaking tour after the war, but when he complained about the way African-American Soldiers had been treated by the Army, the speaking engagements dried up. Johnson died in 1929 and is buried at Arlington National Cemetery.

The 369th Infantry Regiment, formerly known as the 15th New York National Guard Regiment, was a predominantly African American infantry regiment of the United States Army, constituted in 1913 and organized in 1916, that dispelled racist notions that black troops were not suited for combat.

The Regiment is known for being the first African American regiment to serve with the American Expeditionary Forces during World War I, and had one of the most famous military bands, spreading jazz throughout Europe.

In 1918, the U.S Army assigned the unit to fight under the 16th Division of the French Army for the duration of American participation in WWI. They spent more time in continuous combat than any other American unit in WWI, with a record of serving 191 days on the frontlines.

It was there that the 369th earned nicknames such as the "Black Rattlers," for their rattlesnake insignia, and the "Men of Bronze," which was given to the regiment by the French.

Their most common nickname, the "Hellfighters," was given to them by their Germans enemies for their courage, ferocity, and dedication on the battlefield. The unit embraced the nickname and modified it to "Harlem Hellfighters" to reflect their origin.

The French government awarded the Croix de Guerre to 170 individual members of the 369th, as well as a Croix de Guerre citation to the unit, which is awarded to foreign military forces allied to France for acts of heroism involving combat with the enemy.

The heroic act of Pvt. Henry Johnson, nicknamed "Black Death," and Pvt. Needham Roberts fighting off an entire German raid on the night of May 14, 1918 gained national attention and are now the two most celebrated members of the 369th.