Brig. Gen. Michael Bank places wreath from the White House at the grave of the 8th President. 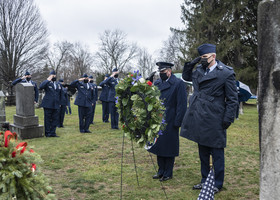 Each year military officers place a wreath from the current occupant of the White House at the graves of our nation's deceased presidents on the anniversary of their birth.

The New York National Guard is also responsible for placing wreaths at the graves of President Chester Arthur, the 21st president of the United States in Albany and Millard Fillmore the 13th president in Buffalo.

Bank and Trottier were accompanied by an Honor Guard of Airmen from the 109th Airlift Wing, which is based at Stratton Air National Guard Base in Scotia, New York.

"Martin Van Buren's life spanned an incredible period in American history," Bank said, "He was born shortly after the Revolutionary War was over and he died at the beginning of the American Civil War."

"He served the people of New York and this great nation his entire adult life," Bank said. "He came to us from a family of emigrants, lived and served from this small town, and returned to continue serving this community."

The annual recognition of Van Buren's birthday is a community event in Kinderhook, said Jane Miller, a Kinderhook resident who helps organize each year's memorial.

While the climax of the ceremony is the presentation of the White House wreath and the sounding of taps, local governments and local entities also presented wreaths during the ceremony.

Van Buren was born on Dec, 5, 1782. He was the first president who had not originally be a British subject. His family was descended from the Dutch settlers of New York and he grew up speaking Dutch as his first language.

Van Buren became a lawyer and kicked off his career in politics by running for the New York state Senate at age 21. He was named to represent New York in the United States Senate in 1821.

Van Buren played a role in establishing the Democratic Party, and served as governor of New York, before becoming the Secretary of State under President Andrew Jackson. He served as Jackson's second term vice president and was elected president in 1836.

He was so skilled at politics that he was nicknamed "The Red Fox of Kinderhook," in a reference to his red hair.

Another nickname for Van Buren – "Old Kinderhook"-is reputedly responsible for the use of the term "OK" to mean something is good. Reportedly Van Buren initial documents he approved of as "OK" and his backers formed "OK Clubs".

Van Buren served for only one term. A recession in 1837, a costly war against the Seminole Indians in Florida, and his refusal to admit the then independent nation of Texas to the United States turned many voters against him.

Van Buren ran for president in 1848 under the banner of the Free Soil Party. This was the first national party to explicitly oppose slavery in the United States. He lost the election and retired to Lindenwald his home outside Kinderhook.