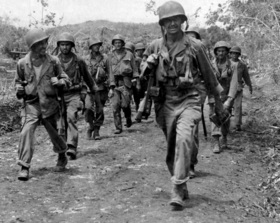 TROY, NY (07/07/2019) (readMedia)-- Veterans of the New York National Guard's 27th Infantry Brigade Combat Team will honor World War II veterans of the 27th Division and one of its Medal of Honor recipients, Lt. Col. William O'Brien who is buried in St. Peter's Cemetery in Troy this morning, July 7.

The memorial ceremony marks the 75th anniversary of the division's fight against the largest Japanese Banzai suicide charge of the Pacific Theater.

Three members of the 27th Division received the Medal of Honor for their actions to defend fellow Soldiers during the attack, which marked the end of Japanese resistance in Saipan in 1944.

WHAT: A wreath laying ceremony at the graveside of WWII Army National Guard Lt. Col. William O'Brien. The event marks the 75th anniversary of the division's fight on Saipan in 1944.

The 27th Division and the Battle of Saipan

The Battle of Saipan was fought in the Mariana Islands from June 15 to July 9, 1944. The invasion force included the U.S. 2nd and 4th Marine Divisions along with the Army's 27th Infantry Division, a New York National Guard element that first mobilized in 1940.

Landings began on June 15, 1944 as the two Marine Divisions established a beachhead. The 27th Division landed the following day and advanced on the island's airfield. The Soldiers repelled a Japanese counter-attacked at night on June 18.

The naval actions at Saipan are known as the battle of the Philippine Sea, a defeat for the Japanese Navy, which lost three aircraft carriers and hundreds of planes. The result of that loss was the complete isolation of the Japanese garrisons on Saipan and the Marianas with no resupply or reinforcement.

The Japanese used caves in the volcanic landscape in their defense of Saipan, creating high casualties for the attacking Americans. The Americans gradually developed tactics for clearing the caves by using flamethrower teams supported by artillery and machine guns.

With no reinforcement and nowhere to retreat, the Japanese commander ordered a final suicidal banzai charge for July 7. At dawn, led by a great red flag in the lead, the remaining able-bodied troops - about 3,000 men - charged forward with wounded soldiers following right behind.

The Japanese surged over the American front lines, engaging both Army and Marine units. The 1st and 2nd Battalions of the 105th Infantry Regiment, along the 27th Division front line, were almost destroyed, losing 650 killed and wounded. However, the fierce resistance of these two battalions, as well as others in the path of the banzai charge, resulted in over 4,300 Japanese killed.

The loss of Saipan precipitated the resignation of Japanese Prime Minister Hideki Tojo and left the Japanese mainland within range of Allied long range B-29 bombers.

The 27th Division would spend the next nine months refitting and training before its next commitment in the Battle of Okinawa in April 1945.

Lt. Col. Bill O'Brien, commanding the 1st Battalion, 105th Infantry Regiment, a National Guard unit from Upstate New York, fought and led his men from the front the night of July 6-7, 1944, firing two pistols and directing his companies and platoons to hold back a wave of an estimated 4,500 suicidal attackers.

His Medal of Honor citation reads:

With many casualties and ammunition running low, Lt. Col. O'Brien refused to leave the front lines. Striding up and down the lines, he fired at the enemy with a pistol in each hand and his presence there bolstered the spirits of the men, encouraged them in their fight and sustained them in their heroic stand.

Even after he was seriously wounded, Lt. Col. O'Brien refused to be evacuated and after his pistol ammunition was exhausted, he manned a .50 caliber machinegun, mounted on a jeep, and continued firing.

When last seen alive he was standing upright firing into the Jap hordes that were then enveloping him. Sometime later his body was found surrounded by enemy he had killed.

O'Brien received the Medal of Honor (posthumously) on May 27, 1945, in a ceremony at Rensselaer Polytechnic Institute, in Troy, N.Y. He was survived by his wife and son, William J. O'Brien, Jr.

Two other 27th Division Soldiers received the Medal of Honor for their actions in the July 7 attack.

Private Thomas A. Baker, also assigned to the 1st Battalion, 105th Infantry Regiment, refused to be evacuated after he was wounded and continued to fight in the close-range battle until running out of ammunition. At his request, his comrades left him propped against a tree and gave him a pistol, which had eight bullets remaining. When American forces retook the position, they found the pistol, now empty, and eight dead Japanese soldiers around Baker's body. Baker is buried at Gerald B. H. Solomon Saratoga National Cemetery in Schuylerville.

Captain Ben L. Salomon, the battalion dentist of 2nd Battalion, 105th Infantry Regiment, aided the evacuation of wounded Soldiers. After defending his unarmed patients from four Japanese soldiers, he manned a machine gun post and effectively repelled numerous enemy forces to enable the evacuation of wounded personnel. When his body was recovered after the battle, 98 dead Japanese soldiers were found in front of his position. For his gallantry, Salomon received the Medal of Honor in May 2002. He is buried in Forest Lawn Memorial Park in Glendale, California.