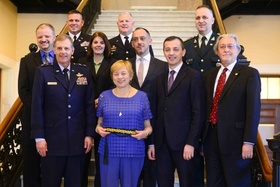 AUGUSTA, MAINE (03/29/2019) (readMedia)-- Minister of Defense Predrag Boškovi? and Ambassador Nebojša Kalu?erovi? of Montenegro visited Maine on March 25 and 26 to meet with military and state leadership in support of the National Guard's State Partnership Program.

Gov. Mills welcomed the delegation to the Maine State House for a meeting to discuss efforts to increase trade and support economic development. The Montenegrin leaders also met with Department of Economic and Community Development Commissioner Heather Johnson and Wade Merritt, president of the Maine International Trade Center. Areas of potential trade partnership were discussed, including the exportation of Maine seafood and importation of Montenegrin wine.

The Maine National Guard - Montenegro partnership began in 2006 and since then the two defense forces have had the opportunity to share numerous training and learning opportunities including large-scale disaster planning and response, and small unit tactics and leadership. The core of the partnership remains focused on military training and emergency preparedness, and National Guard officials are pleased to see the relationship expand beyond its original framework to include economic, cultural and trade opportunities.

"This visit is a landmark occasion in our relationship," said Maj. Nic Phillips, director of the State Partnership Program. "Over the last 12 years we've seen the program grow between the National Guard and Armed Forces of Montenegro. In recent years there's been an increase in young Montenegrins joining our local work force during the summer tourist season and if we keep expanding this friendship I hope to see opportunities for students to conduct university exchanges."

Also accompanying the minister and ambassador was Brig. Gen. Ilija Dakovi?, Montenegro's defense attaché to the U.S. and Canada, who visited Maine earlier this year.

Other events during the visit included a briefing from key staff sections within the Maine National Guard as well as a tour of the Maine State Museum and the Maine Armed Forces Museum.

011: Maj. Gen. Douglas Farnham and Gov. Janet Mills present Minister of Defense Predrag Boškovi? with a piece of custom artwork depicting the symbols of the state of Maine. This unique piece was created by an artisan from the Maine State Prison Industries Gallery. (Air National Guard photo by Tech. Sgt. Travis Hill)