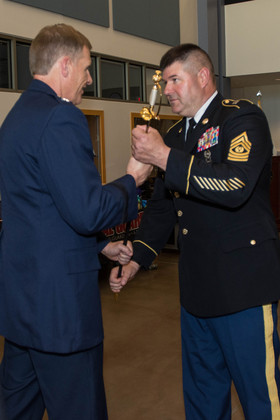 "Command Sgt. Maj. Smith has demonstrated 32 years of steadfast leadership in service to the Maine Army National Guard," Farnham said. "He is the right person to lead our enlisted formation as Maine's top enlisted Soldier."

The state command sergeant major is the senior enlisted advisor to the Adjutant General and represents the NCO corps, influencing policy and serving as a role model, standard-bearer and voice for enlisted personnel.

Smith is a graduate of the US Army's Command Sergeants Major Academy. He is a combat veteran, having deployed to Afghanistan with the 240th Engineer Group in 2006-2007 in support of Operation Enduring Freedom.

"I am humbled that I have been selected for this position and excited and ready to serve all of the enlisted men and women of Maine as the 14th State Command Sergeant Major of our great state," he said. "I look forward to improving the readiness of the Maine National Guard to ensure we are prepared for any mission."

"Command Sgt. Maj. Smith, you have definitely earned your way to the top and deserve to be the 14th State CSM. You are well prepared and will take the NCO Corps to the next level" Doyon said.