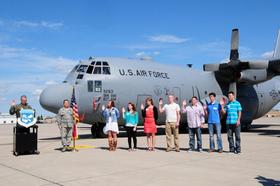 The new Airmen were sworn in by 107th Airlift Wing Command Col. Jim McCready, while standing in front of a C-130 cargo plane which had just returned from Afghanistan. Family members of the new Airman watched the ceremony.

Enlisting in the 107th Airlift Wing are:

•Airman 1st Class Catherine Stoddard, from Middleport, NY. A graduate of Royalton-Hartland HS, she wants to work in the field of Bioenvironmental Engineering.

"This was a memorable day for all. I'm happy to serve with these new man and women. I wish them all the best of luck in their careers," said Tech. Sgt. Krystalore Stegner, one of the wing's recruiting sergeants.