New York Guard Women Are At Home in The Sky 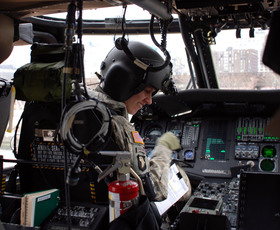 Chief Warrant Officer 2 Michelle Roxby, a pilot-in-command, conducts pre-flight checks before taking off in a Blackhawk helicopter. Roxby belongs to Company B, 142nd Aviation Assault Helicopter Battalion, based in Ronkonkoma.

LATHAM, NY (03/18/2011)(readMedia)-- The women who keep the New York Army and Air National Guard flying found inspiration in the skies and on the ground.

"I like to fly and see different things," said Klemm, a Blackhawk crew chief and Mastic, N.Y. resident. "The people in aviation are great people."

Klemm's inspirations were both remote and close to home -- aviator Amelia Earhart and her Vietnam veteran father. While attending junior high, she did a research paper on Earhart, Klemm said.

"She was able to fly an aircraft, and she was the first woman to fly across the country," Klemm said of Earhart.

Klemm's father, who served in the infantry and received the Purple Heart, told her great things about the military and encouraged her to enlist, Klemm said. She joined the New York Army National Guard because she wanted to be close to her family and community, she added.

Three years later Klemm went to war herself, logging about 500 hours as a CH-47 Chinook helicopter door gunner with the 3rd Battalion, 126th Aviation Regiment, Massachusetts Army National Guard in Afghanistan in 2006. While there, she volunteered to go to Iraq with her own unit. She returned from Afghanistan, and after a month off, deployed with her unit to Iraq.

Woman's History Month validates the role of women in the military and other professions, Klemm said.

Roxby, a Blackhawk pilot-in-command, said she heard the call for Army aviation in 2003, while deployed to Iraq with the NewYork Army National Guard's 442 Military Police Company. She and other Soldiers lived near a helicopter landing zone in Iraq, she recalled.

"When we were living next to the (landing zone), it re-ignited my interest in aviation," said Roxby, of Staten Island, N.Y.

Her family also inspired her, Roxby said. She enjoys the variety that aviation offers, she added.

"Every day is different," she said. "As a pilot-in-command, I like mentoring people and bringing out the best in them."

She also enjoys flying, finding herself in what she called "special moments" while behind the controls of the helicopter.

"Sometimes it just hits you and you think, 'wow this is amazing. I'm really lucky I'm able to do this,'" Roxby said.

One of the pilots Roxby mentors is Bonilla, of Queens, N.Y. She initially joined an Army Reserve military police unit in 2007, Bonilla said.

"I knew I wanted to be an officer, but I wanted to get some enlisted experience first," she explained.

Inspired by her parents and professors, Bonilla earned her commission through the St. John's University ROTC program and her aircraft operations degree from Vaughn College of Aeronautics and Technology. Then came the opportunity to become a Blackhawk pilot, which she said was good timing.

"I felt excited," Bonilla said. "My hard work finally paid off. My dreams were coming true."

Bonilla describes herself as a "new stick" in the unit, said that she focuses on flying while in the air, and only remembers the thrill of it when she's on the ground.

"It's like another day at the office," she said of flying a Blackhawk helicopter. "I'm just another Soldier doing my job."

Santoro is an airman whose flying jobs have taken her across the world, America and New York State. Santoro is from Medina, N.Y. and like Klemms, she was inspired by her father, who was a gunner on a B-52 bomber, and Amelia Earhart.

"She was a go-getter, a female in a man's world," Santoro said of Earhart. "She made it in a man's world." Santoro said she also wanted to follow in her father's footsteps, so she joined the Air Force in 1985. Navigator and pilot positions are held by officers, and she was too short to qualify, Santoro recalled with a laugh.

"I wanted to fly, so I elected to stay enlisted," she said. She served as a boom operator on KC-135 Stratotankers in Plattsburgh and with the 107th Air Refueling Wing until 2008. As a boom operator, she was responsible for controlling the KC-135 and refueling other aircraft, she said.

"When I started in 1985, there wasn't that many female boom operators," Santoro recalled.

When the 107th was converted into an airlift wing, Santoro changed too, and trained to become a loadmaster aboard C-130s. As a loadmaster, she's responsible for any cargo loaded on the C-130, including multiple tons of equipment and military personnel, like airborne troops, Santoro said. The unit has 20 loadmasters, seven of whom are female, she added.

"We have a lot of females, very sharp individuals," Santoro said.

For her, flying is a stress-reliever, she said.

"You could be having a bad day on the ground, but in the sky, you can clear your mind and relax," Santoro said.

Coonradt, of Troy, joined the 109th Airlift Wing in 2000. Her enlisted job, however, didn't challenge her or give her sense of accomplishment, Coonradt said. She was inspired to become an aircrew member by unit members and the unit's Antarctica mission.

"I really wanted to be part of the mission myself," she recalled. "It was hard for me to sit on the sidelines and see others explore the world."

With their ski-equipped LC-130s, the 109th Airlift Wing has provided airlift support for the National Science Foundation's South Pole research since 1988. Since 1999, the unit has been the sole provider of this type of airlift to the National Science Foundation and United States Antarctic research efforts, and is the only unit in the United States military equipped with ski landing gear.

She spoke with aircrew members and gravitated toward the navigator position - an officer job which would allow her to fly and engage her interest in geography and math, Coonradt said. She earned her commission in 2007, and since has traveled to Greenland, Hawaii, New Zealand, American Samoa and air shows all over the country, in addition to Antarctica, she added.

"We're the only unit in the world that does this mission," Coonradt said. "I feel fortunate to be part of it." She enjoys the teamwork of the aircrew, who don't treat her differently yet give her respect, she added.

"It feels great, it's so much fun, it puts a smile on my face," Coonradt said. "I get very disappointed if we don't take off."