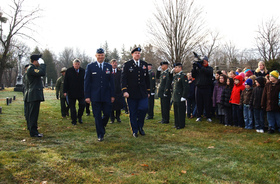 Van Buren's nickname was Old Kinderhook because of his hometown.

The other story for the introduction of OK says it came from Van Buren's habit of scrawling his nickname's initials-OK-on papers he approved of. If it a paper was OK for the president then it was OK for his staff.