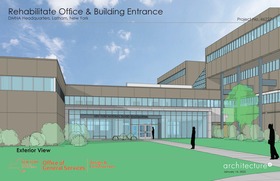 LATHAM, NY (08/10/2022) (readMedia)-- The New York National Guard will hold a symbolic groundbreaking to launch a $3.7 million project to design a new entryway for the 36-year-old headquarters building in Latham on Thursday, August 11.

WHAT: A groundbreaking ceremony marking the start of a $3.7 million project to redo the entryway to 5,085 square-foot New York National Guard headquarters in Latham. The building was originally designed with a drive running between buildings. Following the attacks of Sept. 11, 2001 that drive was closed off and the grounds have been redesigned.

Coverage Opportunities: Reporters will be able to obtain still and video images of the groundbreaking at the National Guard headquarters. Interviews with National Guard leaders.

Members of the news media must contact the NY National Guard public affairs office at 518-786-4581 for access to this secure military facility.

The original National Guard complex was comprised of a two-story armory building and four-story headquarters office building with a second-floor connector. Originally the facility was designed with a driveway running underneath that second-floor bridge and executive parking outside the facility.

The 5,085 square feet addition will unify the buildings by enclosing the open space below the connector to create a new lobby and entrance vestibules for a single, common entrance into both buildings.

The new reception and security desk is configured to provide optimal supervision of the new vestibules and waiting areas. Seating is positioned opposite the display areas to allow ideal viewing opportunities and additional breakout seating is anticipated in the office building atrium.

The exterior will be primarily full-height aluminum curtain walls combined with painted glass fiber reinforced concrete (GFRC) panels and ribbon windows to create a streamlined appearance and complement the existing exterior systems. The entrance approach will be enhanced for visitors and staff by new sidewalks aligned with the new entrances and landscaping.

NYS Office of General Services (OGS) Division of Design and Construction is managing the renovation project for the Division of Military and Naval Affairs. OGS engaged the services of architecture+ in collaboration with MJ Engineering (civil design), Spring Line Design (structural design), and Jade Stone Engineering (building systems design) to develop the design.

Work is expected to take 14 months with completion in October 2023.

The Joint Force Headquarters complex, constructed in the mid-1980's, is home to the command and staff of the New York National Guard, with about 400 military and civilian staff working in the complex each day and another 320 traditional drilling citizen Soldiers who support the headquarters mission.

The facility also includes an armory complex that supports the 42nd Expeditionary Combat Aviation Brigade Headquarters and Headquarters Company and the 206th Military Police Company. These units bring in nearly 300 traditional citizen Soldiers for drill training from across the Capital Region.