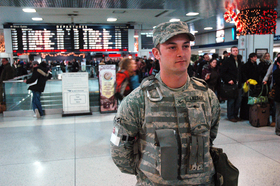 New York Air National Guard Airman 1st Class Michael Lalonde, a member of Joint Task Force Empire Shield, keeps an eye out for anything out of the ordinary at Pennsylvania Station on Dec.22.

NEW YORK, NY (12/30/2010)(readMedia)-- As revelers head for Times Square to welcome 2011, members of the New York National Guard will be on duty to ensure that the holiday is safe and secure.

"Operating at the direction of the governor, that partnership with law enforcement and emergency management in New York City continues to ensure that New York State Military Forces will be ready as New York welcomes thousands of visitors for a safe and secure holiday celebration."

Since the attacks of Sept. 11, 2001, the New York National's Guard's task force in New York City has been an integral part of security planning.

"Our partnership with the New York City Office of Emergency Management brings great benefits to first responders and our National Guard," said Col. David Martinez, chief of domestic operations for the New York National Guard. "New Yorkers expect to see their National Guard out during critical times, and we're proud to serve."

The New York National Guard's 24th Civil Support Team, a unit of 22 Soldiers and Airmen trained to detect and identify hazardous materials, as well as the presence of chemical, biological, or radiological weapons, will also be standing by on New Year's Eve in case they are needed to support the New York Police Department or Fire Department.

Based at Fort Hamilton, in Brooklyn, the 24th CST's Soldiers were recently certified as ready by the Department of Defense. In the past the New York National Guard's 2nd Civil Support Team would send Soldiers and Airmen to New York City on New Year's Eve from their headquarters at Stratton Air National Guard Base outside Schenectady. New York now has two of these highly trained units, with one focused solely on the New York City metropolitan area.

"As we have recently been certified to respond to natural or man- made emergencies we look forward to be able to support local authorities during this year' s New Year's Celebration in Times Square, " said Lt. Col. Kaarlo Hietala, the commander of the 24th CST.

The New York National Guard will also have its Joint Operations Center near Albany manned with enough Soldiers and leaders so that in the event of an emergency the Guard can respond quickly if directed to do so by the governor.

Finally in Rome, NY, the New York Air National Guard's Eastern Air Defense Sector will be monitoring the skies above New York City and the northeast while New Year's celebrations are underway.

Known as EADS, the unit of active-duty New York Air National Guardsmen and Canadian Forces personnel are responsible for monitoring the airspace of the United States east of the Mississippi. The unit is part of the North American Aerospace Defense Command and can direct assets as needed to defend U.S. airspace.

"The Eastern Air Defense Sector's air sovereignty and air defense mission is a 24-hour-a-day, seven-day-a-week responsibility," said Col. John Bartholf, EADS Commander. "Our unit was designed and organized to operate all day, every day, and we'll have a fully-manned shift working New Year's Eve, just as we do every night."