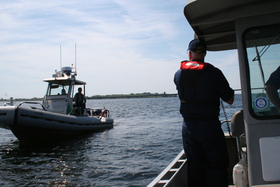 ROUSES POINT , NY (07/20/2012)(readMedia)-- Once again this summer, members of the New York Naval Militia will assist the United States Border Patrol in inspecting pleasure craft entering the United States from Canada on Lake Champlain during peak boating weekends in July and August.

Over five consecutive weekends from July 20 through August 19 , a Naval Militia boat and two-man crew will join Border Patrol Agents in inspecting boats entering the United States at Rouses Point, Clinton County; and directing them to the U.S. Customs and Border Protection inspection station.

The Border Patrol routinely mounts operations during the summer to remind boaters of the need to check-in as they enter the United States. More than 2,000 boats make entry into U.S. waters from the Richelieu River into Lake Champlain each summer. During the peak boating season and high traffic periods of summer weekends, an estimated 100 to 150 boats will pass through the border daily.

The Naval Militia crews on Patrol Boat 230,--a 25-foot boat capable of holding ten people, in partnership with law enforcement agents on personal watercraft – will team with Border Patrol Agents to meet with visiting boaters that do not report, explain the inspection process and direct them to the CPB inspection station

The support on the waters of Lake Champlain allows the Border Patrol agents to better manage the flow of boaters passing through the CBP inspection station and respond to other safety and security needs on the lake.

"Our Naval Militia boat crews look forward to working with the Border Patrol each year on Lake Champlain," said Major General Patrick Murphy, the Adjutant General of New York. "Assisting federal, state and local authorities on New York's waterways, is a mission these citizen Sailors and Marines train for regularly and enjoy."

"The Border Patrol continues to strengthen its law enforcement partnerships along the border by integrating our assets and personnel with our local, state, federal and tribal partners. We enjoy our partnership with the New York State Naval Militia as this unity of effort not only assists us with securing our nations border, but is also critical in engaging and educating our international boating community," said Chief Patrol Agent John Pfeifer of the Swanton Sector.

The New York Naval Militia is a component of the New York Military Forces-- including the Army and Air National Guard -- commanded by the Adjutant General, Major General Patrick Murphy.

Most of the 2,000 members of the Naval Militia are members of the Navy, Marine Corps, and Coast Guard Reserves who agree to perform state missions when needed at the order of Gov. Andrew M. Cuomo. Five percent of the force are volunteers who are retired military members.

Naval Militia members man the nine boats of the New York Military Emergency Boat Service, but they also employ their military skills in other missions useful to the state. During the state response to Tropical Storms Irene and Lee in 2011, members of the Naval Militia served in command posts and in support roles while others helped sandbag the Schenectady City water works to prevent flooding.

The Naval Militia maintains a fleet of nine patrol boats in its Military Emergency Boat Service (MEBS) which support law enforcement agencies, the United States Coast Guard and other federal agencies. The Naval Militia works regularly with the United States Coast Guard in New York Harbor, carrying inspection teams out to ships waiting offshore to enter the harbor aboard Patrol Board 440, a state-of-the-art patrol boat.