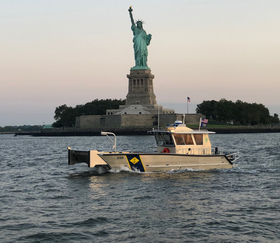 The boats are part of the Naval Militia's Military Emergency Boat Service which operates the boats in support of the Coast Guard and other state, federal, and local law enforcement agencies when required.

The patrol boat fleet will practice working together on the Hudson River. Normally the boats operate singly or in groups of two or three boats. The exercise also tests the ability of the Naval Militia crews to deploy their boats quickly.

The boats will be operating between the Bear Mountain Bridge and Croton Bay. The smaller boats will be launched at Georges Island State Park on the morning of May 18.

The other, smaller boats, are based across the state during the summer where they can be employed on the Finger Lakes, Lake Erie, Lake Ontario, and Lake Champlain or on the Mohawk River.

The New York Naval Militia is a state force which is composed of members of the Navy, Marine Corps, and Coast Guard Reserve, who also agree to perform state training and state duty when called upon. A small percentage of the 2,800 members are not members of one of the Federal Reserve components. Many are retired Navy and Marine Corps veterans.

Members of the Naval Militia put the skills they learn in armed forces to work for New York. In recent years they have responded to snowstorms and flooding emergencies.

The patrol boat exercise on the Hudson River is part of a larger drill dubbed Exercise Empire Challenge involving 100 Naval Militia members from across the state.

Using Camp Smith Training Site in Cortlandt Manor as a base, the exercise will test the Naval Militia's ability to provided trained manpower in an emergency. Naval Militia members will be conducting logistics training, communications training, manning a command post, and putting together chain-saw teams that would be used to clear debris.

One hundred Naval Militia members are expected to take part in the weekend training exercise.

As part of the logistics exercise, Naval Militia crews will practice using a landing craft to deploy supplies to an onshore location.

On Saturday members of the press can contact Naval Militia Commander Ed Balaban at 716-474-5510 for more information.