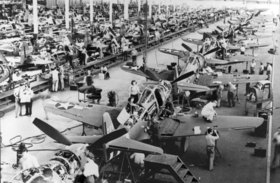 P-39s being built at Bell Aircraft in Niagara Falls. The role of New York's aircraft industry in WWII is the subject of a talk at the New York State Military Museum on January 29.

SARATOGA SPRINGS, NY (01/12/2022) (readMedia)-- After a hiatus in 2020 and 2021, due to COVID-19 concerns, the New York State Military Museum has announced the return of its winter and spring program of weekend talks.

The series kicks off on Saturday, January 29 with a program about aircraft manufacturing in New York during World War II, and concludes on April 309 with a talk about the role of the 42nd Infantry Division in the liberation of the Dachau Concentration Camp on April 30.

The programs are free and all but two are being held at 2 p.m. on Saturdays in the museum conference room.

Visitors will be required to wear a mask to attend the programs and attendance will be limited to 40 people.

"Wings of Victory: Aircraft Manufacturing in New York State during World War II" a talk delivered by retired Army Major Patrick Chaisson on January 29. Chaisson will discuss the World War II aircraft, including the P-47 Thunderbird and Grumman F6F Hellcat which were manufactured on Long Island and the P-39 Airacobra which was built in Niagara Falls by Bell Aircraft, and the role of the companies which produced them.

"No Greater Calamity for the Country", presented by Leon Reed on Feb. 26. Reed will make use of a newly discovered Civil War era scrapbook to tell the store of the early days of the Civil War and the mobilization of the New York State Militia to put down the rebellion.

"Sully's Squad", a talk by the author of the young adult novel of the same name, Kevin Wilson from Granville will be held on March 5. Wilson's hero, Arty is from Saratoga, New York and Sgt. Sully, is from Granville. Wilson discusses the history behind his book.

"The Battle of Valcour Island," presented by Jack Kelly who has written a book on the battle, on March 19. The author will relate the story told in his book " Valcour: The 1776 Campaign that Saved the Cause of Liberty." Learn about the days when Benedict Arnold was a hero.

"Vietnam War 50th Anniversary Commemoration Ceremony", held by the Friends of the New York State Military Museum on Wednesday, March 29 at 7 p.m. This ceremony will be held at the Saratoga Elks Club not at the museum.

"Hellmira", presented by Derek Maxfield on April 2. He will discuss the prison camp in Elmira, New York where captured Confederate soldiers were housed. Andersonville may have been the worst Civil War prison, but being a POW in the Civil War was always tough.

"The 42nd Rainbow Division and the Liberation of Dachau" ,discussed by Col. Richard Goldenberg, the New York National Guard Public Affairs Officer and an Iraq War veteran who served in the New York National Guard Division, on April 30. Goldenberg will present on the division's drive through Germany to the infamous concentration camp and what happened when they got there.

The New York State Military Museum and Veterans Research Center is located at 61 Lake Avenue in Saratoga Springs. The museum is maintained by the New York State Division of Military and Naval Affairs with the mission of telling the story of New Yorkers in our nation's conflicts.

The talks are sponsored by the Friends of the New York State Military Museum with support from Stewart's Shops.