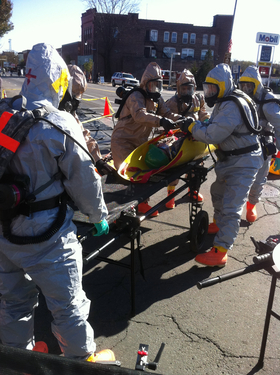 ORISKANY, N.Y. (05/15/2012)(readMedia)-- Members of the news media are invited to cover the training of more than 700 National Guard Soldiers and Airmen from New York, New Jersey, Puerto Rico and the U.S. Virgin Islands as they train Thursday, May 17 at the New York State Preparedness Center to prepare for certification as a regional disaster response force.

WHO: More than 700 Soldiers and Airmen of the National Guard Homeland Response Force for FEMA Region II.

The New York State Division of Homeland Security and Emergency Services established the training center in 2006. The facility, comprised of 723 acres at the former Oneida County Airport prepares traditional and non-traditional first responders to gain the knowledge, skills and abilities necessary to prevent, prepare for, respond to and recover from natural disasters or terrorist-related incidents.

For more information about the center, visit the SPTC on Facebook or visit the New York State Division of Homeland Security and Emergency Services website at www.dhses.ny.gov.

The National Guard's Homeland Response Force (HRF) is one of ten established by the Department of Defense to serve as a Chemical, Biological, Radiological, Nuclear, and High Explosive (CBRNE) Consequence Management Response force.

The HRF provides governors with a response capability to assist first responders in saving lives and mitigating suffering in response to a CBRNE incident.

The 10 HRFs align with each Federal Emergency Management Agency region to allow for closer and more familiar contact with civilian responders. The National Guard forces also provide a greater responsiveness to local authorities due to their closer geographical locations.

The Homeland Response Force consists of some 700 Soldiers and Airmen of the National Guard with expertise in search and extraction of disaster victims, incident site security, decontamination, medical treatment and command and control of the mission.

The core of each HRF is a CBRNE capability similar to that found in the National Guard's existing CBRNE Enhanced Response Force Packages, augmented with additional command and control and security capability. This allows for the force to expand as an incident may require.

The major units that comprise the HRF include:

The 42nd Infantry Division Headquarters, based in Troy, N.Y. provides to overall command and control of the organization.

The 104th Military Police Battalion Headquarters, based in Kingston, N.Y., provides command of the CBRNE response elements at the incident site.

The 1156th Engineer Company, located in Kingston, N.Y. provides engineers trained for the extraction and evacuation of casualties.

The 222nd Chemical Company, based at Fort Hamilton, N.Y., operates the decontamination element.

The New York Guard volunteers of the 88th Brigade, based primarily in New York City, augment the decontamination line.

Wings of the New York Air National Guard all contribute medical personnel for the triage and transfer of casualties for civilian medical treatment.

Security personnel from the New Jersey National Guard include members of the 328th Military Police Company from Cherry Hill, N.J., 253rd Transportation Company from Cape May Court House, N.J., and Security Forces of the 108th Air Refueling Wing from Joint Base McGuire-Dix-Lakehurst, N.J. and the 177th Fighter Wing from Egg Harbor Township, N.J.

Imagery of the exercise can be found at the New York National Guard Flickr site at www.flickr.com/photos/nyng/with/6318118607/

The FEMA Region II HRF Facebook page can be found through a search for the Homeland Response Force Region II.