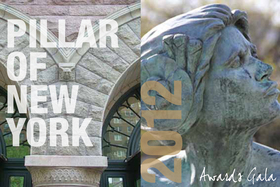 Since 1992 the Preservation League has presented its Pillar of New York Award to individuals and organizations whose work in the field of historic preservation makes them role models for others throughout the state and nation.

Nicholson & Galloway, Inc., under the leadership of Co-Presidents Mark Haynes and Andrew Wilson, will be celebrated for its commitment to old world traditions, craftsmanship and values. Drawing on a vast body of experience the firm's meticulous masonry restoration, coppersmithing and waterproofing have contributed to the preservation of many of New York's most beloved landmarks including the New York Public Library, Rockefeller Center, the General Motors Building, the New York Yacht Club, the Museum of Natural History and New York City Hall.

Building Conservation Associates, Inc., and its founder, Raymond Pepi, will be honored for its leadership in preservation technology and planning. For over 25 years BCA has played an important role in the design and restoration of historic buildings including St. Patrick's Cathedral, the United Nations, Moynihan Station, the Park Avenue Armory, Grand Central Terminal's Oyster Bar, Carnegie Hall and Trinity Church Wall Street. BCA uses state-of-the-art technology to manage the highest quality conservation and preservation projects.

Each year the League presents The Pillar of New York Award to those who have demonstrated a keen understanding of the value of New York's historic resources by taking extraordinary actions to protect, preserve, and promote those assets. Tickets for the black tie gala start at $600 for individuals, and tables of 10 are available starting at $10,000. For more information or to purchase tickets, contact the Preservation League at 518-462-5658 x11.

"Before mass production and pre-fabrication, craftsmen made sure that their products were built to last. But over time, even the best-made building components begin to show their age, and that's where Nicholson & Galloway has made its most enduring contribution," said Anne Van Ingen, Chair of the Preservation League. "Through a commitment to time-honored craftsmanship, Nicholson & Galloway not only performs appropriate and sensitive restoration, they also keep these building trades alive. We are delighted to honor Nicholson & Galloway for their leadership in the field."

The League will also honor Building Conservation Associates. "By fostering a sense of place and the responsible protection of our landmark structures, Building Conservation Associates has served the best interests of New York and its citizens," said Jay DiLorenzo, president of the Preservation League. "Over the years, BCA has gained a reputation for preserving, documenting, and interpreting our treasured historic resources, and we are so pleased to recognize Ray Pepi and his firm as a Pillar of New York."

The Preservation League of New York State invests in people and projects that champion the essential role of preservation in community revitalization, sustainable economic growth, and the protection of our historic buildings and landscapes. It leads advocacy, economic development, and education programs all across the state. As the State's preservation leader, the League seeks to recognize and applaud individuals, organizations and businesses which understand the value of our historic resources and have taken extraordinary actions to protect, preserve and promote those assets.