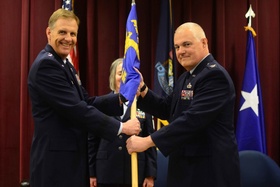 AUGUSTA, MAINE (05/16/2019) (readMedia)-- The Adjutant General, Maj. Gen. Douglas A. Farnham, recently announced the promotion of Steven D. Michaud to brigadier general, and his assumption of command of the Maine Air National Guard. In this position, Michaud is responsible for training, manning and equipping the Maine Air National Guard forces in order to ensure operational requirements and readiness goals are properly met.Michaud was promoted from colonel Sunday, May 5, during a ceremony held at the 101st Air Refueling Wing in Bangor. He assumed command of the Maine Air National Guard on Friday, May 3, from outgoing commander Brig. Gen. Scott Young. Prior to this command, Michaud served as the commander of the 101st's maintenance group, its aircraft maintenance squadron and maintenance operations flight."I have had the pleasure of working with Brig. Gen. Michaud for many years at the Wing," said Farnham. "His service, dedication and commitment to our Airmen give me the utmost confidence that he will do an outstanding job leading the Maine Air National Guard."Michaud thanked his family, including his wife, Anntina, and their two children who were in attendance. He also thanked fellow Airmen who provided support and mentorship throughout his career. He emphasized the importance of family, and how the close ties he has formed through many years of training and deploying has made his military experience a fulfilling one."I am truly honored to be able to continue to serve the men and women of the Maine Air National Guard," said Michaud. "My promotion is a direct representation of all the support and encouragement I have received over the years. I would not have this opportunity today if it were not for my family and friends, and all of our exceptional Airmen who constantly make me proud to wear this uniform."Michaud enlisted in the Air Force in 1981 and was stationed at Loring and Minot Air Force bases before joining the Maine Air National Guard in 1987. He received his bachelor's degree from Embry Riddle Aeronautical University in 1988 and was commissioned as a second lieutenant in 1989. He has participated in numerous global deployments supporting KC-135 aircraft task forces. His awards and decorations include the Meritorious Service Medal with oak leaf cluster and Air Force Achievement Medal with two oak leaf clusters.
Posted Thursday May 16, 2019 at 09:32 am by Maine National Guard