With one day left of session, advocates push for avr, voting rights for people on parole and change of party enrollment date to 25 days before primaries. 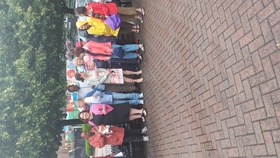 Joining the rally were Ossining Town Supervisor Dana Levenberg, Westchester County Legislator Catherine Borgia and representatives from Senator Carlucci's and Assemblymember Galef's offices. "We in local and county government believe that the ballot really belongs to the voter, not to the government. We want to make sure that we make it easier for people to be able to be voters," said Dana Levenberg, the Ossining Town Supervisor.

[Other quotes from Town Supervisor Levenberg: Restoration of the vote to people on parole: "I don't think it makes a lot of sense to continue to punish people who have already done their time. We know that civic engagement promotes successful reintegration into society which helps reduce recidivism. We want our people to be active citizens, residents of our communities and to do that we want them to participate in government." Change of party enrollment allowed up to 25 days before election: "This would end arbitrary barriers to effective political participation. We think that is the best way to have an active, engaged society."]

AVR would automatically register eligible New Yorkers to vote when they interact with a government agency (i.e., the DMV, Department of Health, etc.). In the current system, the DMV offers an opt-in system which leaves many--1.1 million eligible New Yorkers--unregistered. With AVR, people will not get to the polls only to find they are not registered. New York will join 15 states and Washington DC that have already implemented some form of AVR. Last month the Senate held the first-ever hearing on AVR.

The deadline to change party enrollment would move it to 25 days before the primaries. Previously voters have had to declare their party in the previous calendar year to an election, before candidates were even declared. Voters wishing to participate in primaries often find they could not vote in a primary because they are registered in one party but wished to cast a vote in the other party's primary. This problem is particularly frustrating for people registered as independents who may care deeply about which candidates the main parties will offer in the election. As a result, participation in primaries is very slight, only core party members participate and choose who is on the ballot.

Voting rights for people on parole needs to be codified in law, so that restoration becomes an automatic process. Unless made automatic upon release, re-registration of people released from incarceration is an additional procedure people often do not know they must follow. This is another group excluded at the polls.

In January, the NYS Legislature passed - and Governor Cuomo signed into law -- early voting, consolidation of primaries, pre-registration of 16 and 17 year olds, and registration portability, which allows New Yorkers who move within the state to have their voter registration automatically updated via the USPS. The Let NY Vote coalition has been demanding common sense voting reform in New York for years such as: