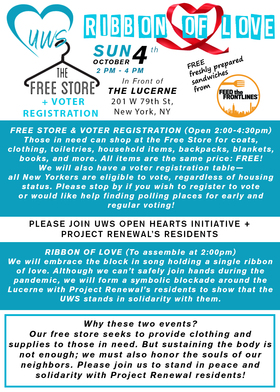 NEW YORK, NY (10/04/2020) (readMedia)-- UPDATE: NYC Public Advocate Jumaane Williams will join together today with UWS Open Hearts Initiative, shelter residents currently housed at the Lucerne Hotel, elected officials, and other leaders to hold a single ribbon surrounding the Lucerne Hotel in solidarity against segregationist attempts to displace the community. The ribbon will form a "symbolic blockade" of the Lucerne hotel, showing solidarity between the UWS community and shelter residents, while the group sings protest songs.