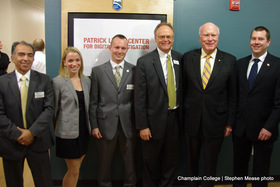 "Thanks to your long-standing support, the Leahy Center for Digital Investigation is now fully functional on the third floor of our new Miller Center at Lakeside Campus," Finney said at the dedication ceremony of the LCDI, adding, "We are poised to build on our technology degree programs and the past successes of the digital forensics center to improve the functioning of the criminal justice system in Vermont."

The core operating goal of the LCDI, Finney noted, is to give Champlain students the opportunity to work on real-world projects in a supervised environment – enhancing their education and increasing the digital forensic capacity of Vermont law enforcement.

Leahy secured the three-year, $500,000 US Department of Justice Bureau of Justice Assistance (BJA) grant in 2010 to provide educational and technical support to Vermont law enforcement agencies related to critical digital forensics issues and a $650,000 grant in 2006 to staff the digital forensics program at Champlain College and conduct digital investigations with Vermont law enforcement. After receiving the most recent grant, Champlain College invested additional college funds to build a secure LCDI facility and teaching lab at the new Miller Center. The project has also received material support from, and maintains operational relationships with the Burlington Police Department, Vermont State Police and the Vermont Internet Crimes Against Children Task Force.

"Champlain College is building a real-world classroom that gives students careers skills for the 21st Century, gives Vermont's law enforcement agencies a revolutionary digital forensics resource, and that once again shows Champlain College's incredible ability to innovate and implement cutting-edge learning programs," Leahy said, adding "This is a program that already has proven itself invaluable in putting criminals behind bars."

Leahy, at age 34, was the youngest U.S. Senator ever to be elected from the Green Mountain State. A graduate of Saint Michael's College in 1961, he received his law degree from Georgetown University Law Center in 1964. He served for eight years as State's Attorney in Chittenden County and has gained a national reputation for his law enforcement activities and was selected as one of three outstanding prosecutors in the United States. Leahy, who ranks second in seniority in the Senate, is the Chairman of the Senate Judiciary Committee and is a senior member of the Agriculture and Appropriations Committees.

Champlain College has been educating digital forensic professionals since 2002 when it was one of the first to offer an undergraduate degree in the field. Since that time Champlain faculty have been working closely with law enforcement at the national, regional and state levels, and the private sector to ensure that the programs provided meet the changing needs of the industry.

"With this upgrade, Champlain can now be part of meeting Vermont's expanding needs for digital forensics through education, examinations, handling casework and evidence management," Finney said. "There is a growing need for digital evidence expertise in courts of law and Champlain is positioning itself to be the premier destination for those who want to study this emerging field of forensics," he said.

Earlier this year, Rajewski was named the "Digital Forensics Investigator of the Year" by Forensic 4Cast, a website offering the latest information about the field. Rajewski was nominated for the award by his students at Champlain College and the winner was determined by an online poll of his peers in the national and international digital forensics community. Champlain's overall digital forensics program was also cited as one of the top college programs in the field in 2010 by Forensics 4Cast.

Rajewski, who earned his bachelor's in Economic Crime Investigation, his masters in Managing Innovation in Information Technology, teaches Computer & Digital Forensics, is a co-director of the Champlain College Center for Digital Investigation and is a Computer Forensic Examiner with the Vermont Internet Crimes Task Force. As a practicing "Digital Forensics Lethal Forensicator" and former global senior digital forensic consultant, he has experience with both civil and criminal digital forensic investigations and in providing expert written and oral digital forensic testimony. He has served many high profile confidential clients and has worked alongside international and local, state/federal governmental entities. In addition to his academic duties at Champlain College, he serves as an examiner of electronic equipment used in high profile Vermont criminal cases.

Prior to joining Champlain, Wilkinson was a coordinator with the State Electronic Evidence Branch (SEEB) of the New South Wales Police Force in Australia, where he worked from 2003 to 2010. In his time with SEEB he examined hundreds of digital devices, developed processes for the extraction of evidence from a range of devices, and presented evidence in court as an expert witness. Wilkinson was also a member of Standards Australia committee IT-12-04 dealing with information security standards, developed and taught courses in digital forensics at Macquarie University and the University of South Australia, and developed national competencies for digital forensic examiners with the Australian National Institute of Forensic Science. Having been responsible for the management of 15 forensic staff and over 1000 jobs a year in one of the world's largest police forces, Wilkinson is truly aware of the challenges faced when dealing with digital evidence. He sees the LCDI program filling a critical need and growth area for both digital forensic labs and digital investigative branches around the world.

Rajewski and the Computer and Digital Forensics major faculty emphasize a hands-on approach to learning in order for their students to gain mastery-level understanding of the subject matter. The digital forensics laboratory at the LCDI offers students the unique opportunity to work on real cases, Rajewski said. "What our students become capable of is tremendous... It is also an amazing resume builder," he added.

The BJA grant facilitated by Sen. Leahy also opens the door for Champlain to develop new strategic partnerships with public and private organizations which need to conduct forensic investigations. Among the activities possible through the LCDI:

• Conduct digital forensic investigations – With the costs of digital forensics on the rise and pressure from society to uncover what actually occurred at the digital crime scene, the LCDI can offer world class digital forensic services right here in Vermont for a fraction of the cost. Leading qualified teams of forensic examiners, Rajewski and Wilkinson can provide attorneys and clients with expert digital forensic consulting services.

• Provide training to those involved in civil / criminal litigation – Champlain College is a leader in the Digital Forensic higher education arena. It will offer training opportunities for first responders, lawyers, police officers, investigators and members of the judiciary using face-to-face, online, and video training modules.

• Data Recovery Services – A laboratory that is fully equipped to properly attempt to recover your precious data is one that you should select. Data recovery and digital forensics is a science that shouldn't be done by non-qualified personnel.

The LCDI has been designated by the State of Vermont's Department of Human Resources to conduct important forensic examinations. This offers the State of Vermont a neutral, highly professional resource dedicated to the prompt, thorough and independent analysis of sensitive data. The partnership is designed to ensure thoughtful collaboration and optimum efficiency.

"The LCDI and the corresponding career-focused curriculum offered to undergraduates, continuing professional studies students and Champlain's Master of Science in Digital Investigation Management (MSDIM), and the new Master of Science in Digital Forensics Science (MSDFS) which will begin in fall 2012, combine to put Champlain at the forefront of this field of study," according to Ali Rafieymehr, dean of the Division of Information Technology & Sciences. "The LCDI offers learning in a real setting, offering greater context and more opportunities to practice the techniques," he said, "The goal is to educate the next generation of leaders in the rapidly growing fields of Digital Investigation, Digital Forensics, Cyber Crime, eDiscovery and Computer Forensics.

Since 1878, Champlain College has provided career-focused education to students from its hilltop campus in Burlington, Vt. Champlain's distinctive educational approach embodies the notion that true learning only occurs when information and experience come together to create knowledge. Champlain offers traditional undergraduate and online undergraduate courses, along with online certificate and degree programs and eight master's degree programs. Champlain offers study abroad programs at its campuses in Montreal, Quebec and Dublin, Ireland. Champlain College is included in the Princeton Review's "The Best 376 Colleges: 2012 Edition." Champlain was named a "Top-Up-and-Coming School" by U.S. News & World Report's America's Best Colleges and is ranked in the top tier of 2012 Regional Colleges in the North. For more information, visit www.champlain.edu.