Paul Smith's College, The Wild Center exploring how climate change will change us 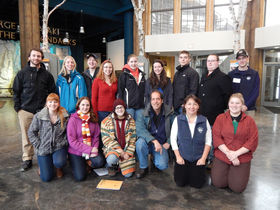 A $50,000 grant from the National Science Foundation and a Pennsylvania-based science-education center will help Paul Smith's College and The Wild Center answer that question by putting it to groups and individuals likely to see the change first.

Prof. Curt Stager of Paul Smith's and Rob Carr of The Wild Center are collaborating on a new class this spring, Communicating Climate Science, that will ask members of fish and game clubs, medical experts, musicians and other North Country residents to project what current and future changes in local climate may mean to their communities.

By the end of the project, students in the class will use that input to suggest how climate change may be most relevant to each group – giving them the tools to make informed decisions about handling changes that some scientists consider inevitable.

Stager, a natural science professor who specializes in Adirondack climate and climate history, said change could be good, bad or neutral. "The point isn't to indoctrinate people into a particular point of view or sow fear, but to empower people to make their own informed decisions about how to deal with changes that are already under way in the North Country," Stager said. "Each group can ask, 'What is really happening here? And what, if anything, does it mean for us?'"

"This class is an extension of The Wild Center's core beliefs about presenting ideas to people and letting them decide for themselves," said Stephanie Ratcliffe, executive director of The Wild Center. "Curt, Rob and the students are not telling each group what to think, but providing them the information that they can decide how to use. Everyone involved is working together in that uniquely Adirondack way to move forward with a difficult and complex issue."

The 16 students in Carr and Stager's class met for the first time this semester. After reviewing the effects of observed and expected climate change in the Adirondack Park, studying the principles of interpretive education and learning about recommended communication strategies, the students will sit down with the different groups to get an on-the-ground feel for how each expects to be affected.

Ultimately, the project aims to foster a conversation about where the Adirondacks may be headed, and how we can better prepare for changes to come. Students will put together presentations based on what they learn that can be used in front of other groups in the future.

After completing the course, most of the students are opting to become Certified Interpretive Guides through the National Association of Interpretation.

William David Burns, executive director of the National Center for Science and Civic Engagement, said the SENCER-ISE program plays a critical role in helping science educators to grapple with compelling civic questions. "The issues the partnerships will explore are important for all citizens to understand and will engage pre-college, undergraduate and graduate students, as well as the general public, in efforts to develop solutions to these issues of national, regional and local importance."

NCSCE's mission is to inspire, support, and disseminate campus-based science education reform strategies that strengthen learning and build civic accountability among students in colleges and universities. SENCER, the NCSCE's signature program, began in 2001 with NSF support. It has since grown to include more than 2,700 educators and 500 colleges, universities, government agencies, not-for-profit organizations, and community-based groups in the United States and abroad. NCSCE is affiliated with Harrisburg University of Science and Technology in Pennsylvania.