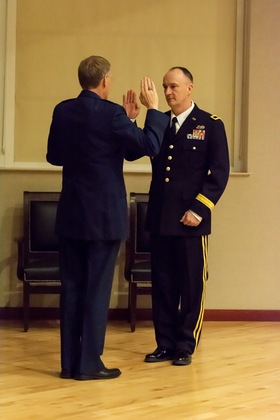 BANGOR, MAINE (01/08/2020) (readMedia)-- Brig. Gen. Dean Preston was promoted from colonel to his current rank Jan. 5 in a 1 p.m. ceremony at the 240th Regional Training Institute in front of an audience of family, friends and National Guard members.

In his new role as land component commander, Preston will be responsible for all training, manning and equipping of Maine Army National Guard forces, and ensuring operational readiness requirements are properly met.

"I want to thank everyone that has helped, pushed, motivated, focused and challenged me along this 30-year journey - truly a team effort," said Preston. "This military journey has allowed me to work with the most professional, patriotic and hard-working people on the planet and I thank you all."

Citing the importance of family and employer support, Preston credited multiple family members, many of them veterans, with instilling in him the desire to "wear the cloth of our great nation." He thanked current and past employers, as well as students who play on his two Washington Academy basketball teams for honoring him with their presence.

"The hunt for victory starts here," Preston said in closing, followed by a round of applause and the singing of the Army Song.

A graduate of the Army ROTC program at the University of Maine, Preston holds a bachelor's degree in civil engineering. He held various platoon leader positions throughout the 133rd Engineer Battalion before being made an executive officer and eventually the commander of the former Company A, 133rd Engineer Battalion, deploying with the unit to Mosul, Iraq in 2003.

Preston's accomplishments while serving in the 133rd also include several rotations to the Southwest border, and coordinating humanitarian relief missions following Hurricanes Katrina, Irene and Sandy. In 2012, he was selected to command the battalion and deployed with the unit headquarters to Afghanistan, overseeing the operations of six companies from seven different states.

Preston has commanded both Maine's brigade-level units and he is a graduate of the U.S. Army War College in Carlisle, Pennsylvania. His awards include the Bronze Star Medal with Oak Leaf Cluster, the Meritorious Service Medal with three Oak Leaf Clusters, the Army Commendation Medal, the Combat Action Badge and the Bronze De Fleury Medal. He resides in Pembroke, Maine with his wife, Avery, and two children, Holly and Cody.