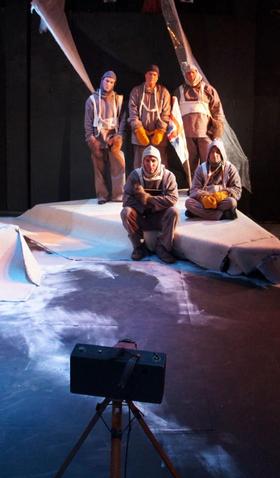 “Terra Nova” focuses on the failed British mission during the race to the South Pole from 1910 to 1912. The production will be presented at SUNY Potsdam’s College Theater on Feb. 7 and 8 at 7:30 p.m.

POTSDAM, NY (02/01/2013)(readMedia)-- SUNY Potsdam's Department of Theatre and Dance will host upcoming performances of Pendragon Theatre's production of "Terra Nova," a riveting play about the race to the South Pole from 1910 to 1912.

"Terra Nova" will be presented at SUNY Potsdam on Thursday and Friday, Feb. 7 and 8, at 7:30 p.m., in the College Theatre, located in Satterlee Hall.

In honor of the expedition's centennial, Pendragon is staging Ted Tally's compelling look at heroism under extraordinarily adverse and deadly conditions. Tally (who also wrote "The Silence of the Lambs") took the play from journals and letters found on the frozen body of British expedition leader Robert Scott. His team refused the use of sled dogs, so were forced to drag their gear across a frozen wasteland, only to find that the Norwegian team arrived before them.

"'Terra Nova' is a highly theatrical reimagining of a devastating journey. The play also offers us an insightful look at human issues of pride, heroism and morality in the face of overwhelming odds," Director Bob Pettee said.

Ticketing services for this event are provided by the Community Performance Series Box Office. Tickets are available by calling (315) 267-2277 or visiting www.cpspotsdam.org. The prices are $12 for general admission, $10 for SUNY Potsdam faculty and staff or senior citizens, and $5 for students and youth.

From directing, choreographing, acting and dancing, to designing and technical work, theatre and dance are highly collaborative art forms at SUNY Potsdam. To learn more about the College's Department of Theatre and Dance, visit www.potsdam.edu/academics/AAS/Theatre.