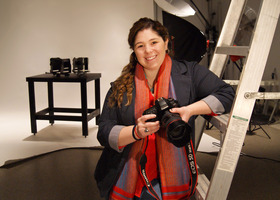 Emily Thomas spends a great deal of time in the photo labs and studio in Cazenovia College’s Reisman Hall. Photo by Tasha Johnson.

CAZENOVIA, NY (02/20/2013)(readMedia)-- Emily V. Thomas, of Plymouth Meeting, Pa., a senior photography major at Cazenovia College, can trace a current photography contest win to September 11, 2001. She says, "My brother, Andrew, joined the Plymouth Fire Company after 9-11 and soon after that, my father joined too. Now my brother is a line officer and my dad, Fran, is a fire police lieutenant."

Thomas first began taking photos of the Plymouth Fire Company at work during her sophomore year at Cazenovia for a class. She says, "One of the assignments was to photograph spot news - which for me happened to be a fire near my hometown. I didn't realize until after I turned in my first project that not everyone had access to emergency services, as I did."

Now, in addition to being a successful photography major at Cazenovia College, Thomas has become a certified member of the International Fire Photographer's Association (IFPA). Because of the family connection to the fire company, she has frequent opportunities to photograph training sessions and on-scene operations at fires and accidents. Last summer she entered a number of her photos in the National Volunteer Fire Council (NVFC) Health and Safety Photo Contest.

Four of Thomas's photos were recently published in the council's annual calendar. Although winners were announced this past August, it wasn't until January that Thomas knew where her photos would be printed. Those four and others may also be used in other NVFC publications that promote safety, health and wellness in fire and emergency services.

Thomas says, "The IFPA has members from all over the world, but it's a small and very close-knit community." During the course of her certification classes, she learned what to watch for, what fire investigators need to know, and how to get the photos needed without putting herself in danger. She has taken photos of fire fighters and first responders during training sessions and on the scene of fires and accidents.

"After hearing I was published," says Thomas, "and then seeing my work in a national campaign, I was excited because that meant the men and women of the emergency service, particularly the ones I photographed, are promoting health and safety, as well as being recognized for what they do as volunteers."

Thomas has been a photographer since she was a child. "My first camera was a Polaroid instant camera – a Christmas gift when I was nine or ten years old," she remembers." My first picture was probably of my dog or a flower in the garden. I look back now at those pictures and realize they were nothing special, just moments in time I wanted to capture." They may have been nothing special, but over the years those moments in time led Thomas to the realization that her hobby could become a career. She now has four cameras and dreams of adding more to her collection, including a specialized camera for underwater, her favorite place to take photos.

Thomas wasn't sure about her skills as a photographer when she was a teen, and there were no photography courses offered in her high school. "I was nervous going into a major where everyone else probably had a class in high school and was not coming into the program blind, as I was, with no real foundation in photography."

She had taken a class in historical preservation which piqued her interest. She says, "I found it exciting to go into an old building and figure out how it could be brought back, to be used in the present. When I started at Cazenovia, I told myself that if I didn't get an 'A' in my first photography class, I would transfer and major in historic preservation."

One of Thomas's priorities in choosing a college was the ability to continue her favorite sport, competitive swimming and diving. "When I was searching for colleges with photography majors, I

looked at Cazenovia's website briefly, but there was no swim team, so I skipped over it." Not satisfied with the information she found about other programs, she returned for another look and discovered swimming and diving had been added to the athletics web page. She continues, "I decided to talk to the coach, and when I visited the campus and facilities at Caz, I knew there was nowhere else I wanted to be."

Thomas has praise for the photography program's professors, Assistant Professor Neil Chowdhury, director of the photography program, and Anthony Potter, associate lecturer. She notes that their different teaching styles provide a thorough grounding in the subject. She says, "Neil is very focused on the technical aspects and is very strict about what he wants from his students, while Tony emphasizes setting up the images and lighting and is more flexible about letting students experiment."

Chowdhury says, "Emily has always been a go-getter, so news of her recognition hardly comes as a surprise. We have become used to hearing about her record-breaking exploits on the College swim team. Not surprisingly, she loves to photograph water. She's also long had a fascination with the world of firefighting, and has been very focused on building a dramatic portfolio around that subject. Whether she's immersed in water or surrounded by flames, Emily has never been afraid to apply what she learns in class to service and community involvement. Her willingness to venture from campus to engage in community service, as well as her consistency and determination in achieving her goals, provide a great example for students in all fields."

Thomas is a member of Cazenovia College's Student Government Association, its chapter of the National Society of Leadership and Success, and the Wildcats' Women's Swimming and Diving Team. She also coaches swim teams in Plymouth Meeting, Pa., and Dewitt, N.Y. To facilitate her underwater photography, she is a certified SCUBA diver. She has plans to earn a master's degree, but is focused currently on finding a position as a professional photographer after her May graduation. She is now working on her Senior Capstone project, a very professional venture to create a book of interviews and photographs of seasoned fire fighters, making a record in words and pictures of how they feel about the dangerous job they do.

1. Emily Thomas spends a great deal of time in the photo labs and studio in Cazenovia College's Reisman Hall. Photo by Tasha Johnson.

2. One of the photos accepted for publication was taken at a house fire where Thomas assisted investigators in discovering the cause of the fire. Photo credit: Emily V. Thomas