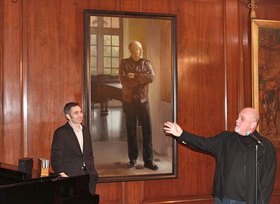 The artist joined the bestselling musician to unveil the painting at Steinway Hall in New York City on Tuesday, Dec. 13. The portrait will hang alongside likenesses of other musical greats, including Franz Liszt, Sergei Rachmaninoff and Arthur Rubinstein.

Joel is only the second living artist to have his portrait hung in the gallery, and his painting will hang next to one of Vladimir Horowitz, the great Russian-American composer and pianist -- and one of Billy's idols. Joel is also the only non-classical performer to be featured in the portrait gallery.

Dr. Wyse was commissioned by Steinway & Sons to complete the artwork. After a photograph session, Joel selected a photo that Wyse worked from. It took him three months to finish the large oil on linen artwork, which measures in at three feet wide by seven feet tall.

"It was a great honor to be there with Steinway and Billy Joel, a truly exciting experience," Wyse said. "It has been great fun and very fulfilling to be able to create art that is about music and musicians. I feel musicians can lend a unique flavor to a painting, and since I am a musician myself, it helps me to see things that another artist might miss."

The BBC, Access Hollywood and other national news outlets covered the unveiling.

The Crane School of Music professor has had his works displayed on a grand scale before. Two of his portraits of award-winning pianist and conductor Leon Fleisher are part of the Smithsonian Institute's permanent collection in Washington, D.C. Wyse was also a contestant on the national reality television competition "Star Portraits," which ran on Bravo! Canada last year, where he painted a portrait of country music star Jim Cuddy. In addition, he was honored with the 2010 Best Portrait Award by the Portrait Society of Canada for his piece, "Harvey." Wyse also painted a portrait of SUNY Potsdam President Dr. John F. Schwaller, which hangs at the College.

Steinway Hall is the flagship store of Steinway & Sons. Since its opening in 1925, the hall has been a landmark destination for music enthusiasts, piano students and professionals throughout the world. Wyse performed a special concert in the venue this fall along with eight other fellow professors, in celebration of the ongoing 125th anniversary of The Crane School of Music.

SUNY Potsdam's Crane School of Music is the only All-Steinway School in the State University of New York. In 2007, the College completed a historic purchase of 141 pianos, the largest single acquisition in Steinway & Sons' 154-year history, for the second time that Crane has had that distinction (in 1955, Potsdam purchased 125 Steinway grand and upright pianos for the then-new Crane Hall).

For more information about the many events taking place during Crane's 125th anniversary year, visit www.potsdam.edu/academics/Crane/125years.

Founded in 1886, SUNY Potsdam's Crane School of Music has a long legacy of excellence in music education and performance. Life at Crane includes an incredible array of more than 300 recitals, lectures and concerts presented by faculty, students and guests each year. The Crane School of Music is the State University of New York's only All-Steinway institution, and is celebrating its 125th anniversary in 2011.