Play About Homelessness Coming to CPS to Address Real Issues

Community Performance Series Partners with Potsdam Neighborhood Center for Food Drive in Conjunction with 'Danny, King of the Basement' 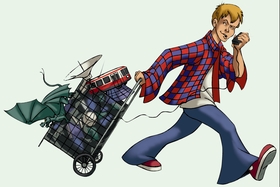 Poster art by Roseneath Theatre for the play, “Danny, King of the Basement,” which will be presented for free in conjunction with a food drive for the Potsdam Neighborhood Center on Oct. 24.

POTSDAM, NY (08/31/2011)(readMedia)-- "Danny, King of the Basement" might be a fictional play about homelessness, but the challenges the main character and his mother face are very real to many North Country residents.

Community Performance Series in Potsdam is partnering with the Potsdam Neighborhood Center to organize the "Good for the Neighborhood" food drive to benefit the North Country community.

As part of its Meet the Arts series, CPS will offer the Oct. 24, 7 p.m. public performance of "Danny, King of the Basement" for no charge, with a suggested donation of two non-perishable food items per person. "Danny, King of the Basement" will be presented by the Roseneath Theatre Company and will take place in the newly renovated Sara M. Snell Music Theater on the SUNY Potsdam campus.

"Danny, King of the Basement" tells the story of Danny "Delco" Carter, the "king of moving." In two years, he and his mom, Louise, have moved eight times -- finding there's just never enough money to pay the rent. Far from losing hope, Danny makes friends by inspiring the kids around him to turn every challenge into a game. But when Danny moves into a basement apartment on upscale Clinton Street, he finds his new friends may have more material things than he does, but they too have problems of their own. Through it all, Danny's creative spirit and positivity help everyone (including himself) overcome their obstacles.

The story of Danny and his mother parallel many stories of North Country residents, particularly those in St. Lawrence County.

CPS is joining forces with the Potsdam Neighborhood Center in an effort to provide food supplies for the local service organization and bring awareness to issues of homelessness, poverty and hunger. The Potsdam Neighborhood Center and several additional service organizations will have displays in the lobby of the Snell Theater during the performance. These local organizations will have information available on their services, as well as ways to get involved.

"I believe poverty affects not only those who are coping with it individually, but also other people in their lives," said Cox. "It affects the teachers who see the children who can't focus because the child does not have nutritious food at home, the landlord who has to put their finances on hold because they do not get the rent money they count on, and even the health care provider who sees the aggravated illness that could have been taken care of with preventative care. Poverty affects us all, and when one person or family grows stronger, we all are for the better."

CPS will also organize a discussion panel after the performance, for audience members who are interested in staying to discuss the play and the topics it raises. Panelists will include professional community members from the universities, hospitals and local service organizations, as well as actors from the production.

"We want to provide access for the community to come together and view this type of theatre," said CPS Education Outreach Coordinator Anna Marie Wilharm. "These issues are very prevalent in today's society and we want to not only support the Potsdam Neighborhood Center through the food drive, but also increase awareness and foster a dialogue."

"Danny, King of the Basement" by Daniel S. Craig was written in 2001 and has toured successfully in Canada and the U.S. for the last 10 years. The production has won several awards, including the Toronto Alliance for the Performing Arts Dora Mavor Moore Award for Outstanding Production and Best Performance, and the Best Theatre for Young Audiences Prize from the Canada Council for the Arts. The Toronto Star raves, "Danny" is "everything that you want a show for young audiences to be."

The touring production is presented by the Roseneath Theatre Company, co-founded by "Danny" author Daniel S. Craig and Robert Morgan. Roseneath Theatre gives up to 300 performances per year to approximately 100,000 young people and their families, making it the largest touring theatre in Ontario.

Tickets can be reserved by calling (315) 267-2277 or visiting the CPS Box Office, located in the lobby of Snell Theater on the SUNY Potsdam campus. Tickets can also be reserved at Northern Music & Video in downtown Potsdam.

Food items can be donated at purchase or the evening of the performance. As always, food donations will be accepted at the Potsdam Neighborhood Center at 2 Park St. in Potsdam. For more information on the performance and activities, please visit www.cpspotsdam.org.

The Potsdam Neighborhood Center, under the umbrella of the St. Lawrence County Community Development Program, is committed to encourage and assist individuals and families attain self-reliance, dignity and self-sufficiency through education, guidance and services. The center provides several food assistance programs within the community, serving 200 to 250 households per month and 85,000 meals per year. The center also offers family development case management and emergency funding for necessities like utilities, fuel and rent. For more information, contact Daisy Cox at (315) 265-3920.

The Community Performance Series "Danny, King of the Basement" performance is made possible through generous underwriting from the Edward John Noble Foundation, with additional support from the Maresca Family Endowment, Stearns-Cottrell Endowment, Stewart's Shops and the Sweetgrass Foundation.

Established in 1989, CPS at SUNY Potsdam is a college-community partnership presenting world-class performing artists and arts education opportunities in Northern New York. A rich mixture of programs links community, classroom and audiences of all ages while preserving access to the performing arts for future generations.