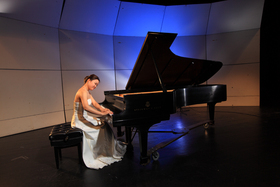 Crane School of Music graduate Dai Yi performs on the piano. Young world-class pianists will travel to the campus for the Julia Crane International Piano Competition from Sept. 20 to 22.

POTSDAM, NY (09/03/2013)(readMedia)-- Twelve of the world's finest young classical pianists will travel to SUNY Potsdam's Crane School of Music to compete for more than $6,000 in prize money for the sixth annual Julia Crane International Piano Competition from Sept. 20 to Sept. 22.

Selected from a pool of applicants from around the world, the 14- to 18-year-old competitors will present a solo recital and a concerto from memory before a jury.

At stake are cash prizes, as well as the chance to perform in the final round with the Orchestra of Northern New York, in a special concert on Sunday, Sept. 22 at 3:30 p.m. in the Helen M. Hosmer Concert Hall.

Since 2002, the Julia Crane International Piano Competition has provided scholarships and performance opportunities for young pianists. To be selected to compete, students had to submit a CD recording their recital program. First prize is $3,000, second prize is $2,000 and third prize is $1,000.

The jurors for the competition are Marc Durand of the University of Montreal, Enrico Elisi of the Eastman School of Music, and François Germain and Paul Wyse, both of The Crane School of Music.

On Friday, Sept. 20, the competition quarterfinals will take place from 11 a.m. to 6 p.m. in the Sara M. Snell Music Theater. The young pianists will present the first movement of one of four concertos by Wolfgang Amadeus Mozart, and excerpts from their solo recital program. Six semi-finalists will then be chosen by the jury.

On Saturday, Sept. 21, selected competitors take part in a public lecture by Dr. Paul Wyse, a public concerto masterclass, and an open roundtable discussion on performing as a soloist with an orchestra in Ralph Wakefield Recital Hall. The competition semifinal round will start at 3 p.m. with the first three contestants, followed by a break. The second group of three contestants will perform at 7:30 p.m., followed by an announcement of the finalists. In the semifinal, contestants will present a 25-minute recital program, which must include one selection from the baroque period. All competitors must perform from memory.

On Sunday, Sept. 22, the jury members will lead a public masterclass for the competitors from 10 a.m. to noon in Snell Theater. Dr. François Germain will lead an open discussion entitled "Preparing for University and Conservatory Auditions" at 1 p.m. in the Ralph Wakefield Recital Hall.

On Sunday Sept. 22 at 3:30 p.m. in Hosmer Hall, the three top finalists will present one of four required piano concertos of W. A. Mozart in the final round with the Orchestra of Northern New York, under the direction of Music Director Kenneth Andrews. Also on the program are the overture to Mozart's "The Impresario," and Joseph Haydn's Symphony No. 104 in D-Major, "London."

All events and rounds of the Julia Crane International Piano Competition are open to the public. Tickets for the final round featuring the Orchestra of Northern New York at 3:30 p.m. on Sept. 22 in Hosmer Hall are $22 for adults, $20 for senior citizens (62 years and older), $10 for students and free for children (12 years and under). Tickets are available through the Community Performance Series Box Office, via phone at (315) 267-2277 or online at www.onny.org, and can also be purchased at Northern Music & Video in downtown Potsdam. All other events are free.

Now in its 26th season, the Orchestra of Northern New York was founded by Music Director and Conductor Kenneth Andrews. The orchestra's mission is to improve the quality of life in the North Country through live performances of orchestral music performed by superb musicians in professional setting. To learn more, visit www.onny.org.

The Crane School of Music is the only All-Steinway School in the SUNY system. For more information about Crane, visit www.potsdam.edu/crane.