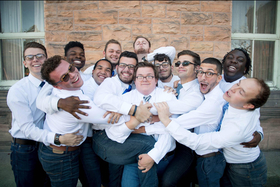 POTSDAM, NY (03/07/2018) (readMedia)-- For 25 years, the members of the Potsdam Pointercounts, SUNY Potsdam's very first a cappella group, have been singing strong.

Now the all-male student vocal group will mark its quarter-century milestone with a special concert this weekend, including performances by the original members.

The Potsdam Pointercounts will host an invitational concert on Saturday, March 10 at 7 p.m., in the Helen M. Hosmer Concert Hall at SUNY Potsdam's Crane School of Music. Tickets are $5 to attend, and all are welcome to join.

"We will perform everything from music released last year, to music from the '50s and '60s. We tend to gravitate toward hits that everyone, no matter their age range, will know and love," said Sekayi Williams '19.

Alumni are headed back to campus for this special singing reunion too. The original members are all set to perform.

The group's roots began with a barbershop quartet that four brothers from the Phi Mu Alpha Sinfonia Fraternity put together for a "singing Valentine" fundraiser. They called themselves the Ripchords. The following year, some of those singers began to recruit for a larger all-male a cappella group. The Potsdam Pointercounts began with 13 singers in the fall of 1993. Both the Ripchords and the original Pointercounts will all take the stage for a couple of numbers on Saturday.

"After 25 years, we have a huge network of alumni. Our passion is promoting music education and engagement with the arts for all ages," Williams said.

The Pointercounts will also release its fourteenth studio album, "Hall of Fame," in conjunction with the performance. The album was produced by professional singer and vocal percussionist Jeff Thacher, who is well known as a member of Rockapella. Copies of the Pointercounts' new "Hall of Fame" album will be on sale at the concert for $10. Entry to the concert is free with the purchase of an album.

The Potsdam Pointercounts conducts at least two tours annually in New York State, visiting high schools and community centers to perform and lead masterclasses. Many visits are to schools where alumni now teach.

Sekayi reflected that Pointercounts members develop deep bonds with each other and with alumni from all class years.

"I never expected this to mean as much to me as it did. In the Pointercounts, I have definitely grown as a musician, but it's really the friendships and the brotherhood that I keep coming back to. I don't know what it would be like to not have that support. It really is exceptional," he said.

The Pointercounts dedicate themselves to educating students of all ages about a cappella music and bringing the love of the arts into schools. The Pointercounts perform a variety of styles of music to engage the creative mind and spirit of students and adults alike through educational workshops and performances. A cappella music holds historical and cultural significance, and the Pointercounts strive to make students aware of one of the oldest forms of choral singing. It is the mission of the Potsdam Pointercounts to create an atmosphere that is conducive to the student's ability to create and enjoy music. To learn more, visit www.pointercounts.com.

Founded in 1816, The State University of New York at Potsdam is one of only three arts campuses in the entire SUNY system. SUNY Potsdam's arts curriculum offers the full palette: music, theatre, dance, fine arts and creative writing. No matter the discipline, people from all backgrounds can find their creative compass at Potsdam, with myriad arts immersion experiences available for both campus and community. For more information, visit www.potsdam.edu.