Rachel Herman Wears Her Heart on Her T-Shirt 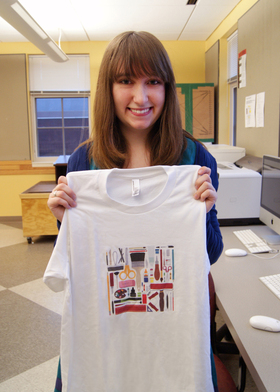 CAZENOVIA, NY (02/06/2013)(readMedia)-- Cazenovia College's Visual Communications students often participate in regional and national design competitions. Many are class assignments, but sometimes students seek out such opportunities on their own. Rachel Herman, of Cicero, N.Y., a senior in Cazenovia College's Visual Communications Program, has won the Adobe® Wear Your ? On Your T, a t-shirt design contest, which she found on the Adobe Students Facebook page. Her design, Tools of the Trade, was one of three winners, and received 'fan favorite' standing because of the number of people who voted for it at www.students-adobe.com.

"What do you stand for?" was the contest theme. Herman says, "The concept caught my attention because I wouldn't be where I am now if it weren't for art instruction throughout my years in elementary and high school. I had received an email from a former art teacher asking for testimonial letters from students who benefited from the art classes offered at my local high school, as they were in danger of being dropped due to budget cuts. I thought, 'Art Saves Lives – Help Save Art.' "

She says, "The basic concept behind this design evolved into the finished piece, which is a nod to the traditional tools of the trade that are disappearing from public schools. It was created using Adobe Illustrator, thus combining old techniques with new technology."

"We launched this contest to inspire and encourage students to test their creativity," said Shagorika Dixit, director of worldwide marketing at Adobe*. "The entries truly showcase the amazing talent and the endless possibilities of our imagination. Congratulations to Rachel and all of the winners."

Scott Jensen, assistant professor of visual communications, who is also Herman's adviser says, "Rachel's entry was not part of a student assignment – but seeking out a creative challenge like this national Adobe design contest seems pretty typical of Rachel; she sets very high goals for herself and then works hard to achieve them. She has entered several national design contests of various kinds, and was a finalist in a national greeting card contest her freshman year. She is both talented and driven."

Herman is close to earning a bachelor of fine arts degree because one of her high school art teachers advised her to check out Cazenovia College and she did. She says, "Once I came to visit campus I never looked at another school. I chose visual communications," she laughs, "because of the 'undo' button. But seriously, I love graphic design because it combines traditional methods with modern technology – a picture may have been created on a computer, but it's a piece of art work."

Jensen comments, "Rachel has a lot of interests and is really active on campus. She's a photographer, has her own jewelry-making business, is the editor of the yearbook, vice president of the Visual Communications Club, a tour guide for the Admissions Office, holds a part-time job, and still manages to excel in her classes. She's a very talented designer, but she has never wanted to stop learning new things and growing as a visual artist. Her enthusiasm is admirable and contagious."

At Cazenovia College, the value of arts education in public schools is demonstrated by the number of students studying every kind of art, and the number of graduates who have gone on to careers in every facet of the arts, from art education, art therapy, gallery ownership, to creative photography and fine arts. Herman says, "The future I plan for myself is a testimonial to the value of teaching the arts in public schools."

Of her future, Herman says, "I've been passionate about art my entire life. I have never wanted to do anything else. I've tried other things, but I always come back to art." Ironically, an old technology has caught Herman's attention – she has become fascinated with the letterpress process. "My ideal career would be to own a letterpress business," she says. "Letterpress is perfect for creating invitations and other specialty printing."

In her senior capstone paper, Herman explores the history and use of letterpress technology. She notes the 'hands-on' quality of letterpress products, and their current popularity associated with the 'hand-made' movement. To further this interest, Herman hopes to tour the Boxcar Press operation in Syracuse, N.Y., and plans to take classes at the Genesee Center for the Arts in Rochester, N.Y., after her graduation from Cazenovia College.

Adobe's Wear Your ? On Your T contest is one of many sponsored by the software company that creates the tools graphic artists use. This contest included a generous monetary prize and a subscription to Adobe Creative Cloud™, giving Herman a year's access to Adobe's Creative Suite software. She says, "Having the opportunity to win a contest like this will prove to be unbelievably helpful as I begin to plan my life after graduation. I am proud that I was able to create a design that means so much to me and is reflective of both where I have come from and where my life is taking me."

Photo1: Rachel Herman's t-shirt design includes tools of the trade she learned to love thanks to dedicated art teachers during her years in public school. Adobe provided her with t-shirts to give as gifts to people who have inspired her.

Photo2: Rachel Herman shows off the t-shirt design she created for Adobe's Wear Your Heart on Your T contest. Photo by Tasha Johnson