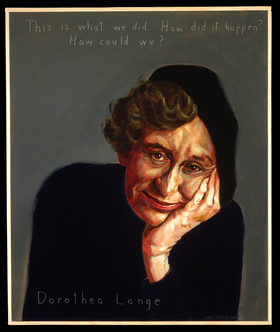 CORTLAND, NY (01/15/2013)(readMedia)-- An influential SUNY Cortland professor who taught political awareness and activism to thousands of students during an unprecedented 51-year career will be immortalized among the likes of Muhammad Ali and Cesar Chavez in an upcoming painted portrait display.

"Americans Who Tell the Truth," an exhibition by Maine-based artist Robert Shetterly, features 28 paintings of activists who spoke out against injustice, often under difficult circumstances. A special, posthumous portrait of William "Bill" Griffen '50, the former peace activist and SUNY Cortland professor of foundations and social advocacy, will be included in the art display that runs from Tuesday, Jan. 22, to Saturday, March 9, at the College's Beard and Dowd galleries.

An opening reception will be held from 4:30 to 6:30 p.m. Thursday, Jan. 31, and admission to the galleries is free and open to the public.

Gallery hours are 10 a.m. to 6 p.m. from Tuesdays through Fridays and 10 a.m. to 2 p.m. on Saturdays. Both are closed Sundays and Mondays.

Each piece in the exhibition includes a painted portrait and a quotation by the subject scratched into the painting's surface. The Dowd Gallery will feature 22 portraits of activists, including Ali, Chavez, Shirley Chisholm and Alice Waters. The Beard Gallery's six works will be themed around activist women in the arts. They include Dorothea Lange, Susan Coe and Lily Yeh.

Shetterly's special portrait of Griffen, the longest tenured faculty member in bothe the College's history and the 65-year history of the State University of New York, will appear with the Dowd Gallery display and it will be included permanently with the "Americans Who Tell the Truth" collection. Remembered for his support of civil rights and non-violent opposition to the Vietnam War, Griffen devoted his life to teaching, writing and activism. He received SUNY's Distinguished Citizen Award in 2008, which honors the highest standards of public service.

After earning a bachelor's degree from SUNY Cortland in 1950, he served in the U.S. Army during the Korean War and then returned to campus for a teaching certification. He taught junior high school for two years before beginning his professional career at the College in 1955.

His teaching career spanned 10 U.S. presidencies, during which time he taught more than 11,200 students, co-founded the Cortland Citizens for Peace and worked with the Syracuse Peace Council. He received a doctorate degree at Cornell University in 1967 and co-wrote Teaching the Vietnam War, a critical examination of how history textbooks portray the U.S. involvement in Vietnam.

Shetterly began his work on the collection because of the frustration he felt about the war in Iraq. He believed President George W. Bush's administration leveraged propaganda about the Sept. 11, 2001, terrorist attacks as justification for war. He originally set out to paint 50 portraits, one for each state.

According to Shetterly, the painting subjects gaze back at the viewer with an invitation to act.

"I was determined to use the portraits and the words of the subjects as an act of defiance against the lies of an administration leading the American people into unnecessary and illegal wars," Shetterly stated. "The fantasy was that I could, by painting the portraits of these courageous people, evoke their spirits in some way to help us now."

Shetterly was working toward a degree in English literature from Harvard in the late 1960s when he enrolled in drawing courses that changed the focus of his creative endeavors from the written word to the painted image. The artist also was active during his college years in promoting civil rights and protesting the Vietnam War.

The result has been plenty of politically inspired art over the decades.

The "Americans Who Tell the Truth" exhibition is sponsored by SUNY Cortland's Art and Art History Department; the College's Institute for Civic Engagement; the Cortland Fund; the Cortland College Foundation; the Center for Peace, Ethics and Social Justice; and the Haines Fund.

Additional funding is provided by Syracuse University's Middle East and North Africa Programs; its Executive Education Program; and the Maxwell School of Citizenship and Public Affairs.

Group tours of the exhibition are available. Contact Gallery Director Erika Fowler-Decatur at 607-753-4216 or erika.fowler-decatur@cortland.edu.

Visit cortland.edu/dowd-gallery for a schedule of related programs.