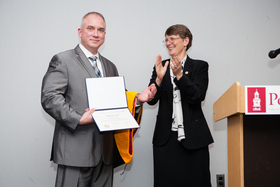 POTSDAM, NY (11/24/2014)(readMedia)-- The State University of New York awarded an Honorary Doctor of Science degree to SUNY Potsdam alumnus Haden A. Land '84, in a special ceremony held in the Hall of the States in Washington, D.C. on Nov. 13.

He is also a prominent and passionate advocate for STEAM, which incorporates the arts into science, technology, engineering and mathematics education. Last year, Land was one of three industry panelists invited to speak at a briefing for Congressional STEAM Caucus members and staff in the nation's capitol.

"Haden Land is a visionary leader whose work to strengthen education and prepare students for successful 21st-century careers is truly remarkable," said SUNY Chancellor Nancy L. Zimpher. "Haden's advocacy for STEAM, which fuses the critical STEM fields with aspects of the arts, continues to foster the kind of talented, creative and innovative thinking among students that leads to their success and drives our economy. Congratulations to Haden on this much deserved recognition."

"It was my pleasure to participate in the award ceremony for Haden Land and to recognize his work to elevate STEAM. As an accomplished engineer, he serves as a great example of the benefits of integrating arts into math and science," Congresswoman Bonamici said. "As our economy evolves, demand for innovative, creative thinkers grows. STEAM will be a critical part of educating the next generation to take risks and develop new solutions to problems. I applaud the work of Mr. Land and SUNY Potsdam, as they raise awareness about the ways that art and design can enhance math and science learning."

Roya Mohadjer, the lead strategist for STEM and STEAM at Lockheed Martin, also provided remarks at the ceremony.

"No one is more deserving of this Honorary Doctor of Science Degree than Haden," said Robert Slegelmilch, vice president of engineering and technology at Lockheed Martin's Information Systems & Global Solutions business. "His tireless dedication to the advancement of science, technology and engineering has had a tremendous impact on our business. His contributions to this organization go far beyond the office and extend well into the community, where he serves on various boards, promoting the importance of STEM education. We commend SUNY Potsdam for recognizing Haden and congratulate him on this prestigious honor."

About Haden A. Land:

Previously, he was vice president of engineering and chief technology officer for Lockheed Martin IS&GS Civil, and vice president of technical operations and chief technology officer/chief information officer for Lockheed Martin Enterprise Solutions. In addition, Land has extensive technical expertise performing in many chief architect and chief engineer roles, and his previous employers include IBM and Loral.

Land applies his longstanding expertise in the engineering and technology industry to the next generation of STEM academia, leveraging his leadership role to shape curricula for the future workforce and igniting interest in advanced innovation.

In addition to serving his alma mater as a Potsdam College Foundation Board trustee, Land is also a trustee for both Capitol Technology University in Laurel, Md., and the Prince George's Community College Foundation Board Chairman in Largo, Md. He is also Board Director of the Hispanic Information Technology Executive Council, and also serves on the Cyber Maryland Advisory Board, MBRT STEMnet Advisory Board, the Security Innovation Network Steering Board, the Washington, D.C., CIO Executive Committee, the Global CIO Governing Body and the World Economic Forum.

His many accolades include being a founding member of the National Cyber Security Hall of Fame; being named a Top 10 Breakaway Leader by the Global CIO Executive Summit; serving as an invited panelist in 2013 and 2014 on the topic of cybersecurity at the International Workshop on Global Security, attended by world leaders from 25 nations; being thrice named a Most Influential Hispanic by the Hispanic Information Technology Executive Council, and being selected eight times as one of the Top Hispanics in Business and Technology by Hispanic Engineer & Information Technology magazine.

In recognition of his many achievements, the SUNY Potsdam Alumni Association presented Land with the Minerva Award, its highest honor in recognition of professional achievements. He has also previously been awarded an Honorary Doctor of Humane Letters degree from Capitol Technology University.

About the State University of New York:

The State University of New York is the largest comprehensive university system in the United States, educating more than 467,000 students in more than 7,500 degree and certificate programs on 64 campuses with more than 2.5 million alumni around the globe. To learn more about how SUNY creates opportunity, visit www.suny.edu.

Founded in 1816, and located on the outskirts of the beautiful Adirondack Park, The State University of New York at Potsdam is one of America's first 50 colleges. SUNY Potsdam currently enrolls approximately 4,300 undergraduate and graduate students. Home to the world-renowned Crane School of Music, SUNY Potsdam is known for its handcrafted education, challenging liberal arts and sciences core, excellence in teacher training and leadership in the performing and visual arts. Empowered by a culture of creativity, the campus community recently launched Take the Lead: The Campaign for Potsdam, which aims to raise $27 million by the College's bicentennial in 2016. For more information, visit www.potsdam.edu.