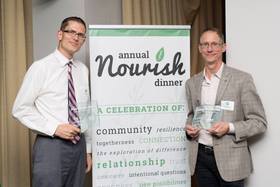 POTSDAM, NY (10/22/2015)(readMedia)-- SUNY Potsdam Associate Dean of Arts and Sciences Dr. Philip T. Neisser was recently honored with a new award from the Public Conversations Project, an organization focused on fostering constructive conversation when there is conflict driven by identity, beliefs and values.

Neisser was recognized along with Jacob Hess, the co-author of their book, "You're Not as Crazy as I Thought (But You're Still Wrong): Conversations Between a Die-Hard Liberal and a Devoted Conservative," which was published in 2012.

The book is a collaborative, curious exploration of politics, religion, identity and civic discourse. A professor of politics, Neisser is the avowed liberal mentioned in the title, while Hess, a social conservative, is the co-founder of All of Life, a mental health and education nonprofit in Utah.

Neisser and Hess were presented with the award at Nourish 2015, the Public Conversation Project's annual event. Tom Ashbrook, the host of WBUR and National Public Radio's "On Point," spoke at the event. After presenting Neisser and Hess with the Founders Award, the national radio host interviewed the co-authors on stage.

About the award recipient:

Associate Dean of Arts and Sciences Dr. Philip T. Neisser is a professor in SUNY Potsdam's Department of Politics and also coordinates the College's environmental studies program. He first came to Potsdam as an undergraduate student in 1975. Neisser's interest in politics led him to attend graduate school, first at Georgetown University and then at the University of Massachusetts Amherst. Neisser teaches in the areas of political theory, democratic theory, political economy and welfare policy. He is the author of "United We Fall" (Praeger, 2008), along with numerous published essays, book chapters and opinion pieces. He is also the co-editor of "Tales of the State" (Rowman and Littlefield, 1997). In 2000, he received a SUNY Potsdam Presidential Award for Excellence in Teaching.

Founded in 1816, and located on the outskirts of the beautiful Adirondack Park, The State University of New York at Potsdam is one of America's first 50 colleges. SUNY Potsdam currently enrolls approximately 4,200 undergraduate and graduate students. Home to the world-renowned Crane School of Music, SUNY Potsdam is known for its handcrafted education, challenging liberal arts and sciences core, excellence in teacher training and leadership in the performing and visual arts. Empowered by a culture of creativity, the campus community recently launched Take the Lead: The Campaign for Potsdam, which aims to raise $32 million by the College's bicentennial in 2016.