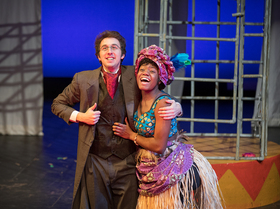 Tristan Lesso '18, left, with Christina Morris '21, in the lead role of Saartjie Baartman, in a scene from the SUNY Potsdam Department of Theatre & Dance production of "Venus" by Suzan-Lori Parks.

POTSDAM, NY (03/12/2018) (readMedia)-- The SUNY Potsdam Department of Theatre and Dance is gearing up to present its spring mainstage production, "Venus," by the Pulitzer Prize-winning playwright Suzan-Lori Parks.

The play is the theatrical story of the so-called "Hottentot Venus." In 1810, Saartjie Baartman, a young South African woman, was enticed to go to Europe to "gain fortune and fame" as the "African Dancing Princess." She arrived in London, and within days was put in a cage and displayed along with other human "oddities" in Piccadilly, where men and women would come to "peek and poke."

Baartman's shapeliness, typical of her people, was deemed extraordinary and exotic, and she became famous, if not rich. The play is rooted in the historical truth of the life of Baartman while she lived in Europe, including her rise to even more notoriety in Paris, after being brought there by a doctor for his "personal study," and where she later died in 1815, at 26 years of age.

"The focus of the production at SUNY Potsdam is the life of Saartjie, who finds herself in a circus sideshow world that is comedic and tragic, often at the same time. Her life story intrigued me. Like most of us, she wanted to have a better life and to find happiness and love," said Associate Professor Kimberley Bouchard, who directs the show. "While the play documents her exploitation, it also portrays her courage, determination and intelligence. She does not succumb to the world. Instead, we see her actively work to negotiate a life on her own terms. It is a story that continues to resonate 200 years after her death."

"Venus" will run from Tuesday, March 20 through Sunday, March 25, in the Proscenium Theater, located in SUNY Potsdam's Performing Arts Center.

Christina Morris '21, a first-year music major, plays Saartjie Baartman, the "Hottentot Venus." She encounters a variety of characters along her journey, including "The Negro Resurrectionist," played by senior theatre major Solina Smith '18; the Docteur, played by music and theatre double-major Tristan Lesso '18, and the Mother Showman, portrayed by Cammie Marshall '19.

"I wrote the play because I love Saartjie and I think she's beautiful, and I wanted to give her a show. This is someone who I want to shine some love on. She wanted to be a star of a show, and now she's a star of a show," Parks said. "It's all about her and her trials and tribulations, and how she tries to make a better life for herself and doesn't succeed. But we all do that. We all reach, you know. We're all reaching for something and falling short."

The play is directed by Theatre and Dance faculty member Kimberley Bouchard with costume designs by faculty member Janet Sussman and technical direction by Todd P. Canedy. The video portion of the production was filmed and edited by Clarkson University faculty member emeritus, Dan Dullea.

To purchase tickets, contact the Community Performance Series Box Office at (315) 267-2277 or www.cpspotsdam.org, or visit the box office, located in the PAC lobby. For more information about this production, contact the Department of Theatre and Dance at (315) 267-2556.

From directing, choreographing, acting and dancing, to designing and technical work, theatre and dance are highly collaborative art forms at SUNY Potsdam. Students and professionals engage in creative problem solving, requiring the setting and meeting of long-term goals, and the analysis and understanding of movement and dramatic literature. For more information about SUNY Potsdam's Department of Theatre and Dance, visit www.potsdam.edu/theatre.