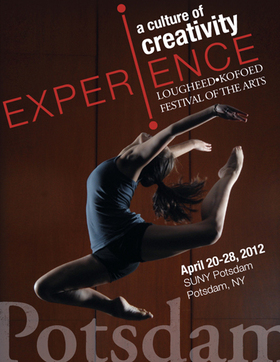 The poster for the inaugural Lougheed-Kofoed Festival of the Arts at SUNY Potsdam features the flexibility of the College’s student dancers.

POTSDAM, NY (04/13/2012)(readMedia)-- The State University of New York at Potsdam will honor the importance of imagination with a new campus-wide festival that will bring together all of the arts disciplines -- as well as uniting faculty, staff, students and community.

The inaugural Lougheed-Kofoed Festival of the Arts will be offered at SUNY Potsdam from April 20 to April 28. The first-ever event will celebrate creativity with a broad array of events encompassing all forms of artistic expression.

A number of guest artists will travel to Potsdam for the first festival, while student talent will be in the limelight, with dance recitals, theatre showcases, poetry performances, music masterclasses and art openings all in store. The guests include a National Public Radio host, a celebrated sculptor, a Boston actor/playwright, members of a Maine theatre company and an internationally renowned conductor.

"The Lougheed-Kofoed Festival of the Arts will bring out the best that SUNY Potsdam has to offer. As one of the premier arts campuses in the SUNY system, Potsdam prides itself on its strength in all of the fields of creative expression. This festival will bring together the entire campus to be inspired in ways we never dreamed possible," College President Dr. John F. Schwaller said. "We are so thankful to the Lougheeds for their leadership and dedication to this vision."

Through the generosity and artistic vision of Kathryn (Kofoed) '54 and Donald Lougheed, the Lougheed-Kofoed Festival of the Arts resurrects the tradition of a dynamic and comprehensive campus spring festival, including theatre, dance, vocal and instrumental performances, visual arts exhibitions, creative writing programs and lectures featuring guest artists.

"This is an opportunity for communications between the disciplines, and the students will take that with them as they go out in the world and inspire other people. It's enriching not just for them, but for the community, and all the people they will affect," said Kathryn (Kofoed) Lougheed '54. "Don and I never imagined that the festival would be as wonderful as it is. We are very excited and very happy to be a part of this. It's a gift to us. We are just in a glow."

All events are free and open to the public.

The guest artists include Grant Barrett, lexicographer, journalist and a radio host well known for co-hosting NPR's "A Way with Words," which is broadcast each week to hundreds of thousands of listeners around the world.

In addition, ceramic artist and sculptor Joe Bova will also visit campus. He is well known for his work in ceramics using animal imagery and for his role as a past president and fellow of the National Council on Education for the Ceramic Arts.

Celebration Barn Theatre, Maine's center for creating and presenting original theatre, will conduct workshops and performances. Over the years, Celebration Barn has helped nurture some of America's finest touring artists, actors, dancers, mimes, jugglers and storytellers and has earned an international reputation for helping people from all walks of life learn to express themselves.

Playwright and actor James Fluhr will also visit campus for production and design workshops leading up to a performance of his work "Our Lady," an engaging show about one young man's journey to fully express, accept and be proud of himself. "Our Lady" honors the struggles of gay teenagers in the face of discrimination and bullying.

The 2012 Dorothy Albrecht Gregory Visiting Conductor, Ann Howard Jones, will be in residence at The Crane School of Music from April 23 to April 28. The director of choral activities at Boston University, Jones is a distinguished clinician, adjudicator, teacher and conductor. She is also known for her long association with the legendary American choral conductor, Robert Shaw. Her visit will conclude in a performance of Verdi's Messa da Requiem with the Crane Chorus, Crane Symphony Orchestra and four guest soloists on April 28 in Potsdam, followed by a New York City performance on May 1 in Avery Fisher Hall, Lincoln Center. The guest soloists are Kelly Kaduce (soprano) and former Crane students Margaret Lattimore '91 (mezzo-soprano), Dimitri Pittas '99 (tenor) and Charles Temkey (bass).

The full jam-packed schedule of events can be found at www.potsdam.edu/artsfestival.

Printed schedules will also be available in kiosks around campus.

The highlights of the 2012 Lougheed-Kofoed Festival of the Arts include:

"I believe, whether it's drama, ballet, dance, opera or the visual arts, whatever it is, it's all art. It's about communication and self-expression and so much more than that. I for one studied very hard in music, piano mostly, and that just consumed all the time I had when I was in college. I didn't realize there was a whole world of creativity out there and it all fit together somehow," Mrs. Lougheed said.

For more information about the 2012 Lougheed-Kofoed Festival of the Arts, visit www.potsdam.edu/artsfestival.