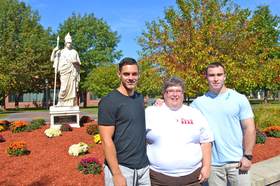 POTSDAM, NY (09/26/2014)(readMedia)-- SUNY Potsdam students are leading efforts to fight sexual assault, both on campus and nationwide. A group of young men have stepped forward to show that they and other men have a critical role to play in changing attitudes and standing up to stop sexual assault.

Three seniors, Chris Dolce '15, Ryan Minsker '15 and Garrett Janes '15, who all intern with campus civility programming, came together to organize a day of action to raise awareness about sexual assault, set for Monday, Sept. 29.

They plan to "paint the campus teal," to raise awareness about sexual assault. Teal is the official color of Sexual Assault Awareness Month, and teal ribbons are recognized as a symbol of the issue by the National Sexual Violence Resource Center.

The three students approached Annette Robbins, the College's director of student conduct and community standards, about organizing the event, after hearing about the campus's response to two sexual violations that were reported earlier this semester.

"This is something that we wanted to tackle because it is an issue on campus, and originally we didn't think it was. When it became an issue, we thought it was our responsibility to address it," said Minsker, who is a senior business administration major from Brewster, N.Y. "We really wanted to step forward because we are males on campus, and we need to show that as males, we can step up against this too. No means no."

The three interns are working with the other members of the Be Ethical, Aware & Responsible (BEAR) campus organization to pull together the event.

The students will tie teal fabric on trees and lampposts, and give away teal ribbons in the union, while asking the campus community to sign the It's On Us pledge. SUNY Potsdam President Dr. Kristin G. Esterberg has also invited the BEAR students to decorate the President's House with the teal ribbons as well.

All are encouraged to wear teal on Monday in solidarity with the cause of ending sexual violence on campus, in the community and nationwide.

At 11:45 a.m., President Esterberg and Renewal House Executive Director Ilene Burke will speak in Minerva Plaza. All are welcome to attend this event.

In addition, Student Government Association Vice President Scott Turner '15 is one of the national student organizers for President Barack Obama's It's On Us campaign, which launched at the White House last week. A senior creative writing major from Edmeston, N.Y., Turner was contacted this summer about taking part in the advocacy efforts, participating in national conference calls and organizing a student action committee for the SUNY Potsdam campus.

It's On Us is a movement that aims to create a cultural shift in the way we think, talk and act, when it comes to sexual assault. Turner is working to raise grassroots support from students, faculty, staff and alumni alike -- setting up tables in the union to encourage people to sign the It's On Us pledge. He and his group are planning events throughout the coming academic year.

For more information about It's On Us, visit www.itsonus.org.

Founded in 1816, and located on the outskirts of the beautiful Adirondack Park, The State University of New York at Potsdam is one of America's first 50 colleges. SUNY Potsdam currently enrolls approximately 4,300 undergraduate and graduate students. Home to the world-renowned Crane School of Music, SUNY Potsdam is known for its handcrafted education, challenging liberal arts and sciences core, excellence in teacher training and leadership in the performing and visual arts. Empowered by a culture of creativity, the campus community recently launched Take the Lead: The Campaign for Potsdam, which aims to raise $27 million by the College's bicentennial in 2016.