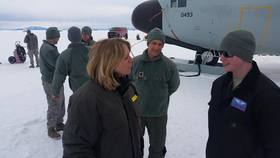 Secretary of the Air Force, Deborah Lee James, greets A1C Wyatt Peters and Lt. Col. Kurt Bedore in Antarctica on 25 January, 2015. Both Airmen are members of the 109th Airlift Wing.

STRATTON AIR NATIONAL GUARD BASE (02/23/2015)(readMedia)-- Members of the New York Air National Guard's 109th Airlift Wing begin coming home from their annual deployment to Antarctica on Tuesday, Feb 24, as another season of support for Operation Deep Freeze comes to an end.

Members of the press are invited to see 30 members of the unit return home to New York aboard an Air Force C-17 .

WHO: Thirty Citizen Airmen assigned to the 109th Airlift Wing who served at McMurdo Station in support of the National Science Foundation's United States Antarctic Program.

WHAT: Airmen are returning to Stratton Air National Guard Base on board an Air Force C-17 Globemaster III transport plane.

Members of the press must contact Tech Sgt. Catharine Schmidt at 518-344-2423 or Master Sgt. Willie Gizara at 518- 248-3799 for access to this security military facility. All media members should report to the 109th Airlift Wing main entrance gate at 10:30 a.m. on Tuesday, Feb. 24, 2015. Be prepared to show photo identification for access to Stratton Air National Guard Base.

Imagery of the aircraft landing at Stratton Air National Guard Base. Interviews with Airmen returning from the most recent deployment to Antarctica along with other Airmen who have supported ODF throughout the 27th season.

The 109th Airlift Wing supported the United States Antarctic Program for the 27th season in 2014-2015 deploying seven aircraft and a total of 575 Air National Guard Airmen to McMurdo Station, Antarctica since the end of October. The wing flew 241 missions, transported 3,132 people and moved 4,594,900 pounds of cargo and fuel around the continent.

The final mission of the season was flown on Feb. 15, when an LC-130 delivered supplies to Amundsen-Scott South Pole Station. This was the final flight to support researchers wintering over at the South Pole.

The 109th Airlift Wing operates the LC-130 "Skibird", the only aircraft in the United State military which is equipped with skies and can land on snow or ice. The 109th operates ten of these unique aircraft.

An average of 120 Airmen were based at McMurdo Station, the hub of the American presence in Antarctica, throughout the support season.

A second C-17 flight will bring other personnel back to Stratton Air National Guard Base on Friday, and the seven LC-130s will be arriving back at Stratton after the five day flight home across the Pacific Ocean and North America, all week.

Secretary of the Air Force, Deborah Lee James and Lt. Gen. Stanley "Sid" Clarke III, the Director of the Air National Guard, were among the hundreds of passengers flown across Antarctica this year by the 109th Airlift Wing.

James and Clarke visited Antarctic in January and visited with members of the 109th Airlift wing there.