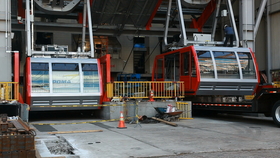 ROOSEVELT ISLAND, NY (10/25/2010)(readMedia)-- The second of the two cabins on the Roosevelt Island Aerial Tramway was attached on the south track ropes on Friday October 22nd and system testing on the second side can now begin. The Tram, undergoing modernization since March 2010, is projected as being in full operation in November 2010. The first cabin was attached on October 7th and has been undergoing successful testing since. According to RIOC President Leslie Torres, "Various milestones must be achieved before the Tram is commissioned for full operation by the New York State Department of Labor. The launch of the second cabin, which is now ready to undergo extensive testing is another major milestone in this process."

The Tram modernization contractor is POMA, SA of France, one of two companies in the world equipped to perform the "state of the art" overhaul. The cabins are attached to a double hanger arm, one of the important innovations of the new Tram system, providing for a more stable ride. The cabins of the previous system were suspended from a single armed hanger. The cabins can now be operated independently on the north and south track ropes, another significant improvement over the old system. Each cabin has the capacity to carry 109 passengers and a cabin attendant. Cabin dimensions are 22 ft. 11.6 in. X 12 ft. 9.6 in. and each weighs 22,125 lbs empty and up to 41,525 lbs when fully loaded.

Originally opened in 1976, the Roosevelt Island Aerial Tramway System was in its 34th year of operation when it was closed in March for renovation. Its predicted useful life expectancy was17 years when originally installed. Having served ably for twice the expected time, it was well overdue for modernization. The Tram carries more than 2 million passengers a year and has been integrated into the MTA's Metrocard system, so that Tram riders can transfer to and from City buses and subways.

The entire modernization project is expected to cost up to $25 million, $15 million of which was funded by the State of New York and $10 million with Roosevelt Island Operating Corporation (RIOC) funds. RIOC is the New York State Public Benefit Corporation which operates and develops Roosevelt Island, a community of about 12 thousand residents, developed pursuant to a 1968 General Development Plan between New York City and State, as part of the "new communities" initiative originating with federal Great Society programs. Three more high rise buildings and two new parks are expected to open in the next several years, completing the development plan. "The Tram modernization project anticipates increased capacity needs as the Island continues to grow," according to Leslie Torres.