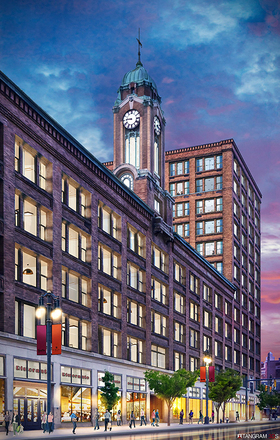 ALBANY, NY (05/07/2018) (readMedia)-- The Preservation League of New York State has selected Sibley Square in Rochester to receive an award for Excellence in Historic Preservation.

"In 2013, WinnCompanies began its largest preservation and reuse project to date, revitalizing 1.1 million square feet of space as a mixed-income, mixed-use development, incorporating commercial, residential, educational and recreational elements in a historic setting," said Jay DiLorenzo, President of the Preservation League of New York State. "Sibley Square calls to mind the entrepreneurial spirit that fueled Rochester's success in the past, and is once again moving the Finger Lakes toward the future. The project demonstrates the power of partnership among government, educational institutions and the private-sector development community."

Opened in 1906, Sibley's was once the largest department store between New York City and Chicago. Generations of Rochester residents and visitors have fond memories of the store's holiday window displays which attracted crowds to this center city location. The store closed in 1989.

RuthAnne Visnauskas, Commissioner of New York State Homes and Community Renewal said, "Governor Cuomo understands that we can use preservation as a tool to reinvest in our cities, towns and neighborhoods. By repurposing historic buildings into affordable housing, we are creating opportunities for New Yorkers while maintaining the character and cultural identity of neighborhoods, and bringing new vitality to local economies. Congratulations to all the awardees."

"We greatly appreciate the Preservation League's recognition of the hard work and imagination that many public and private partners have committed to the revitalization of the Sibley Building as Sibley Square. We are proud of our role in re-inventing this historic icon as a modern hub for the complete range of housing and innovation, preserving a gracious building while re-energizing a bright and vital future for Rochester's downtown," said WinnCompanies CEO Gilbert Winn.

"With our annual awards program, the Preservation League explores not just the present, but the future of historic preservation. Many of the 2018 award winners provide valuable examples for others by incorporating energy efficiency techniques, adaptive reuse strategies and use of Federal and State Historic Tax Credits," said DiLorenzo. "Each year, we are impressed by the number and variety of laudable nominations, and this year was no exception. We are delighted to celebrate the revitalization of Sibley Square, and to commend all members of the project team for their leadership and vision."