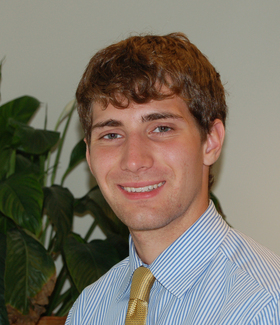 Virnig, who graduated with a degree in psychology, will be a recruiter for the college, travelling to his home state of Minnesota, as well as to Maine, Western Massachusetts and parts of Connecticut to tell the Saint Michael's story. He will also plan travel for other recruiters, attend college fairs, visit high schools, and read applications of prospective students during application season.

Virnig, the son of Lorilee and Michael Virnig of Minnetonka, Minn., graduated from Minnetonka High School as an AP Scholar before coming to Saint Michael's. He was named recipient of the SMC Sutton Scholarship for 2012 and 2013, for service to the community, demonstrated leadership in SMC Fire & Rescue, and successful academic achievement.

Virnig was not only Captain of the Fire Unit, he was also a leader in the Saint Michael's Wilderness Program. As such he passed the exacting tests to become a Wilderness First Responder and took the AMGA Rock-climbing program for Single Pitch Instructors (SPI). He led students on climbing and hiking, rock-climbing and snow shoe expeditions. He was a cross-country runner in high school, did snowboarding, skiing and biking, but he became a dedicated climber and hiker through his experience in the SMC Wilderness program.

As Fire Captain, Virnig had a range or responsibilities which amounted to a 40-hour a week commitment, making sure all the shifts were covered, 24/7 and 365 days a year, organizing training of the squad members, and more. He represented the unit at New England Chief conferences, where he learned that the Saint Michael's Fire Squad was one of the only college squads that covered a wide range of territory, not just their campuses. The Saint Michael's fire program covers Winooski and Colchester, and cooperates with other towns in the county. He will continue to participate in the SMC Fire Squad program as much as time allows.

At Saint Michael's College www.smcvt.edu  students are challenged to do their best, find their niche, take on opportunities to grow, and immerse themselves in academic pursuits. Intellectual rigor, compassion, teamwork, caring-these characterize a Saint Michael's experience. A residential Catholic college, Saint Michael's is steeped in the social justice spirit of its founding priests, the Edmundites. Saint Michael's is located three miles from Burlington, Vermont, one of America's top 10 college towns. Headed by President John J. Neuhauser, the college has 1,900 undergraduate students and 500 graduate students. Identified by the Princeton Review, 2013 as one of the nation's Best 377 Colleges, and included in the Fiske Guide to Colleges 2014, Saint Michael's students and professors have received Rhodes, Woodrow Wilson, Goldwater, Pickering, Guggenheim, Fulbright, and other grants and awards. The college is one of the nation's top-100, Best Liberal Arts Colleges as listed in the 2013 U.S. News & World Report rankings.