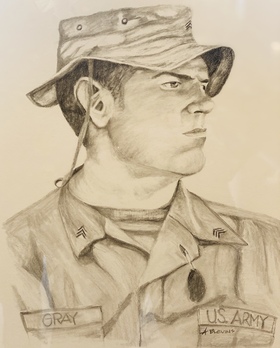 AUGUSTA, MAINE (09/15/2020) (readMedia)-- On September 13, in front of an audience of family, friends and fellow soldiers, the portrait of Staff Sgt. Harold Gray was unveiled for all to see. Gray passed away in February 2020, ultimately due to wounds he received in 2004 while serving in Iraq with Company A, 133rd Engineer Battalion.

"Today is a somber occasion, but it also a time for us to celebrate Harold's life and everything he gave to us during his service," said Brig. Gen. Dean Preston. "Staff Sgt. Gray left a lasting impact on everyone who had the honor of serving with him. I challenge all our soldiers, past and present, to never forget the sacrifice made by Staff Sgt. Gray, and all the honorable men and women pictured alongside him. They embody the selfless service we are all striving to achieve...I will see him every time I walk through those doors, and I like that idea."

Preston was Gray's company commander during Gray's final deployment and now serves as the land component commander of the Maine Army National Guard.

One of Gray's closest friends, Sgt. 1st Class Daniel Trojecki, shared about the bonds he and Gray developed leading up to and during the deployment. "It was a kind of brotherhood you can only form in that environment," said Trojecki, referencing the shared hardships that bring Soldiers together.

Lt. Col. Shanon Cotta took a few moments to describe "the larger-than-life figure that was Harold Gray." Cotta served as Gray's platoon leader during the 2004 Iraq deployment. In addition to praising his willingness to perform any battlefield mission and his skills as a heavy equipment operator, Cotta also recounted the "quiet grace" and profound impact that Gray had on caregivers and staff during the many years he spent at the Togus VA medical center.

The portrait, drawn by retired Master Sgt. Angie Blevins, will be displayed in the main drill hall of Camp Chamberlain alongside the nine other fallen Maine Army National Guard soldiers that have lost their lives since 9/11. Dog tags with Gray's name and rank will also be hung on the battlefield cross memorials at both Camp Chamberlain and in the Hall of Flags at the Maine State House.

The full list of soldiers' portraits displayed at Camp Chamberlain is: