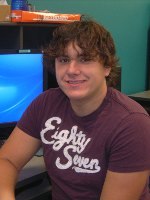 CHESTERTOWN, MD (01/02/2013)(readMedia)-- Steve McFall, a student employee at Washington College's Geographic Information Systems (GIS) Program, has won a coveted scholarship from the national organization dedicated to promoting the trade and craft of geospatial intelligence, one of today's hottest fields for college graduates. The U.S. Geospatial Intelligence Foundation awarded McFall, of Smethport, Pa., a $2,000 scholarship as a graduating high school senior. The honor also came with an invitation to the foundation's annual GEOINT Symposium, as well additional mapping software and training.

McFall was among 25 winners, from doctoral candidates to high school students, awarded a total of $104,000 in scholarships. A freshman at Washington College who attended Smethport Area High School, McFall is majoring in anthropology with a minor in computer sciences.

GIS stands for Geographic Information Systems, a computerized mapping system that stores, displays, and analyzes any kind of information that can be geographically pinpointed. It's used in a wide array of disciplines and research-everything from marinebiology to criminology-making it a popular field of study for job-seeking college students.

"I first got involved with GIS in the summer before starting seventh grade," McFall says. "My local 4-H educator had suggested a GIS camp held at Penn State. It was the first time I had ever heard about GIS and I thought it was the most interesting technology ever." Stewart Bruce was hosting the GIS camp that summer, and the next year he moved to Chestertown, Md., to teach GIS technology at Washington College. McFall continued to attend Bruce's summer camp for the next three years. Ultimately his interest in Washington's GIS program led him to matriculate at the college, and last summer Bruce hired him as a GIS Lab intern. He has worked on a variety of projects, including building a 3D model and virtual tour of the Eastern Shore Correctional Institute, which helps law enforcement and corrections staff better prepare for and react to emergencies at the prison.