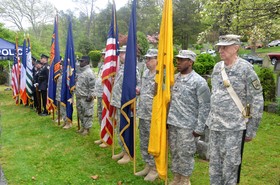 WHAT: A memorial service to commemorate the members of the New York Guard's First Provisional Regiment who died while guarding New York City's water system in 1917 and 1918. Thirty-two of the men memorialized on the stone died from the Spanish Influenza pandemic which swept the world in 1918 as World War I raged.

During the First World War German agents appeared to have successfully destroyed a munitions plant on Black Tom Island in Jersey City, New Jersey, prior to American entry into the war in the spring of 1917. There was concern that the New York City water system of reservoirs and aqueducts could be sabotaged as well.

New York formed the 1st Provisional Regiment to guard the aqueduct system in 1917 and 1918. These citizen volunteers, ranging from their teens to their 60s were armed with obsolete weapons and clothed in old uniforms and paid $1.25 a day, but they did their duty, walking patrol day-after-day and night-after-night. Average strength was about 1,600 volunteers. More than 8,000 New Yorkers served in this home guard during World War I.

When the so-called "Spanish Influenza" swept across the world in 1918 and 1919, 32 New York Guard volunteers of the 1st Provisional Regiment were struck down in the last three months of 1918.

To honor the New York Guard members who died on duty-32 who died from influenza and eight other members-- a bolder from Bonticon Crag in the Shawangunk Mountains, along the line of the aqueduct that the Guard members protected, was moved to Sleepy Hollow Cemetery and turned into a memorial on property dedicated by William Rockefeller.

The New York Guard of today is an all-volunteer uniformed force whose members augment and assist the New York Army National Guard in response to state emergencies.