The Spanish-American War is the subject of a free talk at New York State Military Museum on Saturday, Feb. 22 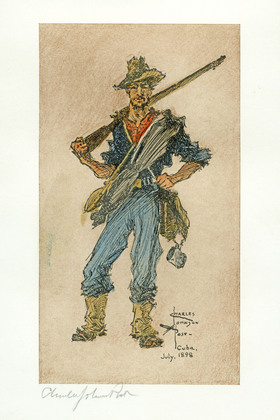 LATHAM, NY (02/10/2020) (readMedia)-- The story of a New York National Guard unit in the Spanish-American war, as remembered in the artwork of one of its Soldiers – Charles Johnson Post--will be the subject of a free talk at the New York State Military Museum in Saratoga Springs on Saturday, Feb. 22 at 2 p.m.

Local historical author Bill Howard, who has loaned his collection of Post's art for a temporary exhibit at the museum, will be delivering the talk.

Post, who was born in 1873 and died in 1956, enlisted in the New York National Guard's 71st Regiment when the Spanish-American War broke out in 1898. The talented artist brought his sketch books with him and drew what he saw during his service.

The 71st New York left Long Island City on May 13, 1898 and landed in Santiago, Cuba on June 23. The New York National Guardsmen took part in the attack on San Juan Hill on July 1, 1898 alongside the more famous Rough Riders and their deputy commander, Lt. Col. Theodore "Teddy" Roosevelt.

The tropical fevers in Cuba caused more casualties than the Spanish and the 71st was sent back the United States in August 1898. Post was one of those who became ill – with either malaria or typhoid fever-but survived to go onto a career as a journalist and as an official with the New York City Department of Labor.

After retiring in 1946 Post turned his sketches from 1898 into oil paintings and he wrote his memoirs of his time as a Soldier. The book "The Little War of Private Post", which included his artwork, was released in 1960.

Howard, a graduate of Manhattanville College and a Herbert H. Lehman Fellow at the University at Albany Graduate School of Public Affairs, will tell the story of the 71st New York at war using Post's artwork.

Howard has edited and provided introductions for reissues of several Civil War history classics, "The Peninsula" by Major General Alexander Webb, "The Battle of Gettysburg" by Samuel Adams Drake and Ohio at Gettysburg. He published a full length history of the Civil War battle of Ball's Bluff in 1994. In 2007, Howard published an edited volume, "The Civil War Memoir of William T. Levey," in 2007. His most recent book is "What the RAF Airman Took to War".

The 71st Regiment organized in New York City in 1852 as part of New York State Militia . Prior to the Civil War the battalion saw duty in the "Dead Rabbit Riot" in 1857 in Manhattan and the "Quarantine Riots" on Staten Island in 1858.

In April 1861 the regiment was mobilized for 90 days' service and sent to Washington as the Civil War broke out. The unit served in the First Battle of Bull Run before returning to New York. The 71st was later called up to serve in Washington DC's defenses for 90 days and then for 30 days during the Gettysburg Campaign in 1863.

In 1898 the members of the 71st volunteered to serve as federal troops when America went to War with Spain. The 71st did not serve as a unit in World War I, although its Soldiers did, but did fight in Europe as part of the 44th Division in World War II.

The regiment was disbanded in 1993 when the New York National Guard was restructured.