UPDATE on Campaign to Save Historic Erie Canal Vessels 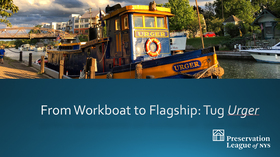 The League will present a Tug Talk on the Urger on Sunday at 11:00 a.m. at the Waterford Visitors Center as part of the Tugboat Roundup.

The Preservation League of New York State is continuing to add signatures to a petition to protect the historic Tug Urger and other Erie Canal vessels that provide an authentic link to the past. The statewide not-for-profit organization now has more than 1,000 supporters, including 25 state and municipal leaders along the Erie Canal corridor – from members of Assembly in the Capital District, to the Montgomery County Executive, to Mayors and Supervisors of Towns and Villages from Waterford to Pittsford.

"In the midst of two celebrations – the bicentennial of the beginning of construction of the Erie Canal (1817-1825) and the centennial of the completion of the Barge Canal (1905-1918) – the New York State Canal Corporation, under the New York Power Authority, plans to beach the tugboat Urger, flagship of the Erie Canal and beloved teaching tug," said Jay DiLorenzo, president of the Preservation League. "This vessel has introduced thousands of school children and members of the public to New York's navigable waterways, reinforcing the role of the Erie Canal in making New York the Empire State."

For 25 years, the Urger traveled up and down the canal system for school field trips and public events. Now the Canal Corporation and New York Power Authority (NYPA) want to pull it from the water and make it a dry-land exhibit, permanently disabling the Urger and preventing it from returning to service.

On August 1, the League launched an advocacy campaign to call attention to the plight of the Urger. At the same time, the NYS Canal Corporation, NYPA and the NYS Department of Environmental Conservation began the process of sinking up to 30 canal vessels off Long Island to create artificial diving reefs for sport fishing and recreational diving. Initial phases of artificial reef construction occurred without public or stakeholder input and included the sinking of three vessels eligible for listing on the National Register of Historic Places.

According to a letter signed by some 25 state and municipal officials and addressed to Gil Quiniones, President of the New York Power Authority and Brian Stratton, Director of the New York State Canal Corporation:

"We maintain that the historic canal fleet is an important element of our Erie Canal history and wish to see this history preserved in context for future generations of New Yorkers. As representatives of communities along the canal, we recognize the significant role this inland waterway plays as a transportation and recreational corridor, as part of our state's history and as an engine for economic development. In 2015, the Erie Canalway National Heritage Corridor completed a study that demonstrated the corridor generated $307.7 million in economic impact, supported 3,240 jobs and delivered $34.9 million in tax revenue. Our communities are counting on the continued integrity of the canal – including its historic vessels – to leverage future investment."

"Tug Urger is one of only 27 vessels listed on the National Register in New York State and is listed with statewide historical significance. We support the continued use of Urger on the canal and believe this vessel would be of better public service as a floating ambassador of the canal than a beached and decommissioned relic at the Lock 13 NYS Thruway Visitor Center."

In addition to the effort to save the Urger, the League and its allies are calling on the Canal Corporation and New York Power Authority to make the remaining phases of the disposition process more transparent, and to work with stakeholders to develop a plan for New York's remaining fleet of historic canal vessels.

The Preservation League of New York State invests in people and projects that champion the essential role of preservation in community revitalization, sustainable economic growth and the protection of our historic buildings and landscapes. We lead advocacy, economic development and education programs across the state.