Vietnam Era veterans to be honored during March 28 event at the New York State Military Museum. 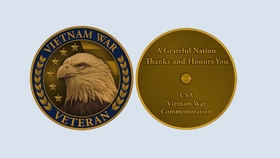 Vietnam Era veterans can receive this lapel pin during a ceremony at the New York State Military Museum on March 28.

LATHAM, NY (02/25/2020) (readMedia)-- Former service members who served during the Vietnam War era will be recognized on March 28 at the New York State Military Museum in Saratoga Springs.

Friends of the New York State Military Museum and the Capital District Chapter of the Association of the United States Army will be presenting memorial pins to those who served from 1955 to 1975 during the 2 p.m. event.

Veterans wishing to be honored must register in advance by contacting Bruce Farley at the Museum at 518-226-0490 or emailing him at sbuxc76@verizon.net.

Registration must be completed no later than March 25, 2020. Please provide your name, dates of service and name of spouse/family/guest you will bring. Each individual Vietnam War Era Veteran will be recognized and presented with the lapel pin and have an opportunity to say a few words.

Anybody who served on active duty during the period from Nov. 1, 1955 to May 15, 1075 – including members of the reserve or National Guard who were on active duty for training-are eligible. Service in Vietnam is not required.

The lapel pin is issued by the United States Department of Defense as part of its 50th Anniversary Vietnam War Commemoration, a multi-year program to thank and honor Vietnam veterans and their families for their service and sacrifice.

This "lasting memento of the Nation's thanks" is now worn by more than 2 million people.

People married to a Vietnam era veteran whose spouse has died are eligible for A Surviving Spouse pin.

Refreshments will be served after the ceremony and all participants are invited to visit the Military Museum's most recent permanent exhibit, "Hot Spots in the Cold War: The Korean and Vietnam Wars."