The Met: Live in HD Brings Riveting Performances to Screen with 'Werther' on March 15 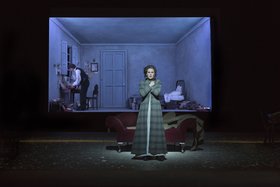 Jonas Kaufmann (left) stars in the title role in Massenet’s “Werther,” alongside Sophie Koch as Charlotte. The opera will screen at The Met: Live in HD on March 15.

POTSDAM, NY (03/05/2014)(readMedia)-- The stunning new Metropolitan Opera production of Jules Massenet's dark romantic tragedy, "Werther," will screen to movie theaters around the globe through The Met: Live in HD on Saturday, March 15.

The Wall Street Journal called the production "a taut drama about passion, obsession and pursuit."

"Kaufmann, currently the most in-demand, versatile and exciting tenor in opera ... is ideal in the role. He sings with dark colorings, melting warmth, virile intensity and powerful top notes," The New York Times said. "French mezzo-soprano Sophie Koch... brings a plush, strong voice and aching vulnerability to Charlotte. Mr. Eyre's production, while essentially traditional, uses video imaginatively and has touches of modern imagery. Mr. Eyre deserves unreserved credit for the detailed and involving performances he draws from his cast."

Massenet's "Werther" will screen live from the Metropolitan Opera stage at 12:55 p.m. on Saturday, March 15 at Potsdam's Roxy Theater. There will be an encore screening at 6:30 p.m. on Sunday, April 6.

The opera will be performed in French, with English subtitles. The approximate running time is three hours, including one intermission.

The 2013-14 season of The Met: Live in HD is sponsored in the North Country by SUNY Potsdam's Crane School of Music and J.S. Cinemas.

All productions will be shown live worldwide on Saturdays. There will also be encore presentations offered on Sundays locally. Doors open a half-hour before show time, and there is immediate seating for advance ticket holders.

In The Met: Live in HD, robotic cameras, strategically placed around and behind the stage, capture the beauty and power of live performance from striking angles, and heighten attention to both performance and production. Intermission features and English subtitles bring the stories to life.

Tickets prices are the lowest available in the nation: $18 for an adult, $15 for senior citizens, $12 for students and $9 for youth age 18 and under.

Tickets are available by calling the Community Performance Series Box Office at (315) 267-2277, or visiting the Roxy Theater or Northern Music & Video in downtown Potsdam or the CPS Box Office in the lobby of Sara M. Snell Music Theater. You can also reserve tickets online by visiting www.cpspotsdam.org or www2.potsdam.edu/cps/eventpgs/methd.html.

For more information on the 2013-14 The Met: Live in HD season, visit the Metropolitan Opera website at www.metopera.org/hdlive.