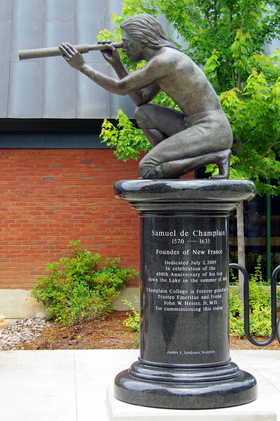 BURLINGTON, VT (07/03/2009)(readMedia)-- There's a new "big man on campus" this summer at Champlain College - Samuel de Champlain - in the form of a new bronze statue by Vermont artist and sculptor James Sardonis of Randolph.

The new statue, commissioned by Champlain College Trustee Emeritus John W. Heisse, Jr. M.D., was unveiled in a special ceremony on July 2, the opening day of the "When the French Were Here," Quadricentennial symposium.

The statue, which rests on a column of polished black granite from Quebec, depicts the French explorer as he might have looked in the summer heat of July 1609 when he arrived in the region by canoe. The 39-year-old explorer Champlain is posed kneeling, looking out on the lake with a spyglass. The statue, located in the Rozendaal Courtyard between Alumni Auditorium and the IDX Student Life Center, has a view to the west overlooking Champlain College's Perry Hall and the lake.

Champlain College President David Finney noted that when the generous offer to fund the project was made by Dr. Heisse last summer, there was no question about moving ahead quickly and making it happen during the 400th anniversary year. "This is a wonderful opportunity for the College and our community to celebrate the history of this place," Finney said.

Sardonis, 58, is known to many for his piece "Reverence," the two whales' tails off Interstate 89 at Technology Park in South Burlington, Vt. He said he wanted to offer a more modern interpretation of the famous explorer, "While no one is really sure that Champlain had a spyglass with him when he arrived here, it offers the perfect metaphor for 'exploring, looking and observing' - certainly a great message for a college campus," Sardonis explained. His image of Champlain also breaks some other statue stereotypes by making Champlain is clean-shaven, shirtless and barefoot. Champlain would be 7 ½- feet tall if standing.

After making several small models and the sculpting the full-sized statue in wax, Sardonis cut the statue into several pieces and made heat -resistant forms. Those were used as molds for the molten bronze poured at the Campbell Plaster and Iron foundry in West Rutland. The artist then re-assembled the bronze statue in his Barre studio. The final section - the face- was poured just two weeks ago. Sardonis then completed the assembly, carefully hiding the welded seams. It was polished and he applied a green patina finish and surface wax to protect the smoky dark gray surface.

It took Sardonis and a crane operator Francis Tash five hours and some careful maneuvering to assemble the three pieces on campus Tuesday morning.

The black-green granite column and pedestal base was imported from Quebec to reflect the important role Champlain played in helping to found New France to the north. The stone was cut and finished in Barre. For more on the artist and his work, go to www.sardonis.com.

The column bears the following inscription: "Samuel de Champlain, 1570-1635, Founder of New France. Dedicated July 2, 2009 in celebration of the 400th Anniversary of his trip down the Lake in the summer of 1609. Champlain College is forever grateful to Trustee Emeritus and friend John W. Hiesse, Jr. M.D. for commissioning this statue."

The unveiling ceremony was part of a four-day international conference for historians and scholars looking back on 400 years of French influence in the region. Keynote speakers include such luminaries as Pulitzer Prize-winning historian David Hackett Fischer, whose latest book, Champlain's Dream, offers a definitive biography of the French explorer; Eric Thierry, an expert in travel literature at the University of Paris-Sorbonne; and Raymonde Litalien, the honorary archivist of Canada.

Champlain Professor Nancy Nahra, who along with historian and Champlain Professor Willard Sterne Randall organized the symposium, will edit the dozens of research papers presented during the conference. The papers will be published for further scholarly review and distributed widely to libraries in the coming year.

Vermont's 400th anniversary celebration of Champlain presented a rare opportunity for the College, according to its president whose office overlooks the new addition to campus. "It seemed we just couldn't let this go by. We are Champlain. The lake is Champlain, and he's our guy," Finney said.

"Having this statue of our namesake allows all of us on campus - students, faculty and staff alike - to celebrate the region's four centuries of rich tradition and heritage. It will stand as a long-lasting symbol of the Quadricentennial and reminder of the power of exploration in our daily lives," Finney added.

Champlain College, founded in 1878, offers "Education in Three Dimensions" - a distinctive educational approach to professionally focused majors, developing life skills and leadership based on critical and creative thinking. It has nearly 2,000 campus-based undergraduate students on campus and is ranked in the top tier of Best Baccalaureate Colleges in the North by 2009 America's Best Colleges, published by U.S. News & World Report. To learn more about Champlain College, visit www.champlain.edu.