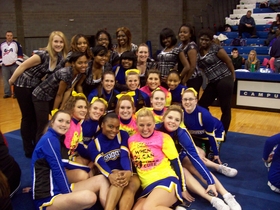 GCC Cheer and Dance Team at the 2010 Cheer for a Cure.

The Cougar Cheer Team and Cougarette Dance Team are off to a great start for their first year as competing squads. Formed in the fall 2009 semester, the teams have had less than a year to get their teams and routines in shape for competition.

"I was so proud of the teams", Coach Jennifer Newell said. "We competed against some outstanding squads who have a long tradition of being tough competitors. Our teams worked really hard and came out on top."

The Cheer for a Cure competition raised funds to benefit JDRF and was co-sponsored by Buffalo's Kiss 98.5 radio station. Cheer for a Cure is one of the largest cheerleading competitions in Western, NY with approximately 141 teams gathering to compete from elementary age to college level. The Cougar Cheer Team beat out Jamestown Community College, Erie Community College, University of Buffalo (all-girls team) and Daemen College to take the top honor in the College Division.

"There was so much energy in that arena, what an incredible moment it was when they announced our name as Grand Champions," Newell said. "We were all stunned, it was unbelievable!"