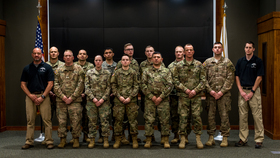 SPRINGFIELD, IL (04/20/2018) (readMedia)-- Springfield, Ill. – Soldiers from the Army National Guard of seven states completed the National Trainer Course for Funeral Honors Teams at the Illinois Military Academy, Camp Lincoln, Springfield, Illinois, on April 20. The trainer certification course is an 80 hour class, consisting of two weeks of classroom instruction and physical training. Soldiers must demonstrate knowledge through written evaluations, uniform inspections and ceremony evaluations in order to graduate. The course is the highest level certification for Soldiers who are members of Funeral Honors Teams, and graduation from the course allows Soldiers to certify new members in their home states.

"This course has taught me the fundamentals of being a trainer, I came to honor veterans and to be able to train young Soldiers to do what we are doing for future Soldiers," said Spc. Brittany Smith, of Elgin, Illinois.

"The transformation of the Soldiers from day one to day fourteen is rewarding, the personal and professional growth that occurs during this course in their personal conduct and professionalism is rewarding to me as an instructor," said Hise. "This course is important because the Army National Guard is the only component of the Department of Defense that has a national standard for how funerals are conducted, it allows states to support one another in unique ways."

The Illinois Army National Guard sent three Soldiers to attend the course, their graduation brings the number of trainers for the state to 14, and the total members of Funeral Honors Teams to 80. Last year Illinois Funeral Honors teams conducted 4,556 funerals at cemeteries around the state, this year teams are averaging 370 services a month.