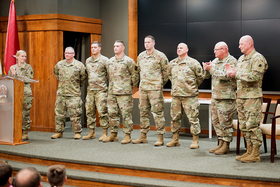 SPRINGFIELD, IL (11/07/2018) (readMedia)-- A mobilization ceremony was held in Springfield Nov. 7 for six Soldiers who will deploy to Afghanistan as part of Bilateral Embedded Staff Team (BEST) A22.

The Soldiers will train for a brief time at Fort Bliss, Texas, before deploying to Afghanistan. This unique mission allows Illinois Army National Guard Soldiers to train and deploy side-by-side with their Polish counterparts.

The Soldiers are from various parts of Illinois from Chicago, Kankakee and Lisle to towns further downstate like Germantown Hills and Springfield, Illinois. They were selected for the mission based on their training and skills.

As part of the deployment supporting Operation Freedom's Sentinel, the team will assist the Polish Military Contingent in the Islamic Republic of Afghanistan. In partnership with allied and coalition forces, BEST A22 will train, advise and assist the institutions within the Afghan Ministry of Defense and Ministry of the Interior.

The team is expected to return to Illinois in the summer of 2019.

2018 marks the 25th anniversary of the partnership between the Illinois National Guard and Poland. Established in 1993, it has been the most successful State Partnership in the nation, helping Poland emerge from the Warsaw Pact to become a member of NATO and one of the United States' staunchest allies. In addition, Illinois Army National Guard troops have co-deployed with Poland on every Polish rotation to Iraq since 2003.