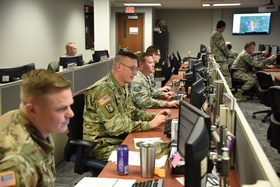 The exercise simulated a 7.8 magnitude earthquake event centered on the New Madrid Seismic Zone. The exercise took place at the 183d Wing and the Joint Forces Headquarters in Springfield, Illinois.

Representatives from the Illinois Emergency Management Agency (IEMA) and the Civil Air Patrol also participated in the exercise.

"Our efforts were focused on quickly gaining awareness of the scope and severity of the event and rapidly deploying forces to the areas of greatest need," said Col. James G. Silvasy, Commander of the joint task force. "We absolutely take our responsibility to the citizens of Illinois as seriously as the responsibility we have to the security of our nation."

"This joint task force is unique in that all of their training scenarios are 'worst case' and affect a significant portion of the population," said Maj. Gen. Richard Hayes Jr., The Adjutant General of the Illinois National Guard. "They steep themselves in a very complex problem and emerge with a response on scale with the scenario."

Approximately 100 members from the Air National Guard's 183d Air Operations Group and the Army National Guard's 65th Troop Command participated in the exercise. The two units were tasked to form a standing joint task force in 2013 and regularly train together in order to prepare for major disasters.

Photo Cutline 1: Members of the Illinois National Guard monitor a simulated earthquake in southern Illinois as part of the exercise known as Prairie Assurance. Approximately 100 members of a special joint task force for complex catastrophes participated in the exercise that took place at the 183d Wing in Springfield, Illinois. (U.S. Air National Guard photo by Lt. Col. Laura T. Fogerty)